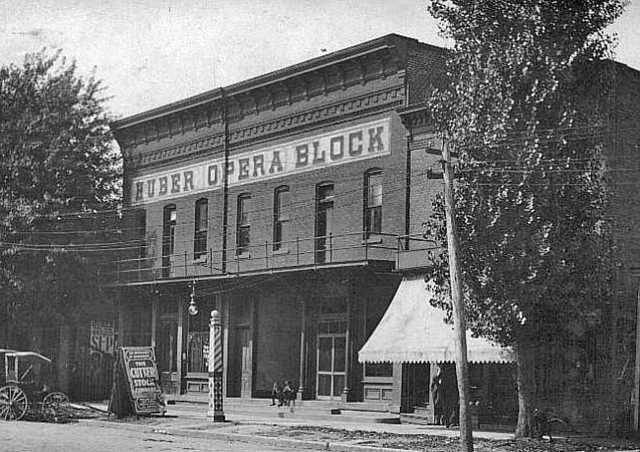 This theater is listed under Hicksville OH as “Huber’s Opera House” in the 1897-98 edition of the Julius Cahn Official Theatrical Guide. The Mgr. was A.A. Huber. Seating capacity was listed as 925, and the theater was on the ground floor. Tickets were 25 cents and 50 cents. The proscenium opening was 25 feet wide X 20 feet high, and the stage was 25 feet deep. The house had electric illumination and there were up to 7 players in the house orchestra. There were 2 local newspapers, the Independent and the News, and 2 hotels for show folks, the Swilly House and the Hotel Baltimore. The railroad was the Baltimore & Ohio. The 1897 population of Hicksville was 3,000.

Go to http://hicksvilleohio.org/HicksvivlleTheMovie.aspx for more info and a picture from the 1960’s.

From The Hicksville Historical Society: The Huber Opera House had its humble 1882 beginnings as the two story Mackey’s Brick Hotel. At that time, the building was roughly thirty feet across. Within the decade, the Huber family had purchased the hotel and expanded it about twenty more feet to the west, making a commercial room available for businesses. Traveling salesmen also made use of the hotel as a midtown display area for their wares. Rooms above were small by today’s standards, but fitted with a heat stove, window, and simple furnishings. After the Pettit Opera House, at the corner of High and Main Streets, burned down, George Huber went into action with plans to transform the hotel into a showplace for live acts. His experience as an NYC hotel and theatre owner gave him a wealth of practical knowledge into the mechanical aspects of theatre needs as well as an artistic eye for outfitting a building for maximum impact. Opening night was described as a dazzling occasion, with ten arc lights illuminating what was called the audience room and the sophisticated color palette taken from the spectacular stage curtain. Rich golds, blues, and olive greens played against the silvery aluminum and delicate cream tinted terra cotta. Elaborate designs in floor tiling echoed the colors at the building’s front entrance where beautiful paneled doors opened to a spacious lobby. Theatrically speaking, the Huber was used as a tryout theatre for plays headed to bigger houses in Chicago and New York. William Jennings Bryan was said to have appeared at the Huber along with authors of national note. When local-girl-turned-Broadway-star Amelia Bingham brought her company to town, people paid the unheard of admission price of 75 cents to see the show. Mutt and Jeff’s appearance was advertised on post cards sent to theatre patrons and handed out in advance. In November of 1899, a wild horse was tamed onstage before the eyes of an amazed audience. For most of its history, the Huber was also a center of community activity. High school graduations and concerts were held there. Class plays and community productions such as Emily White Hull’s Roof Garden Revue and George Patterson’s historical pageants debuted on the Huber stage. War bond rallies, Red Cross meetings, and conventions were held in the auditorium. Ricky Nelson, Chubby Checker, Huey Lewis, 3 Dog Night, Mike Smith, Tammy Cochran, and Mickey Rooney all took advantage of the near-perfect acoustics. The twentieth century saw silent movies give way to talkies and basketball games. Then came a time when the building fell into out-of-town ownership and into disrepair and disrepute. Extra law enforcement officers patrolled on weekends and locals avoided downtown Hicksville after dark. In 1994, neighboring business owner Mary Ann Barth suggested the Hicksville Historical Society look into rescuing the building. It took nearly four years to gather enough information and interested parties to work on building acquisition. Area individuals, organizations, civic groups, and government officials formally banded together in 1998 with purchase of the building made by The Huber Opera House and Civic Center in December of 1999. (Click on the thumbnail above to see an artist’s rendering of what the restored opera house may one day look like.) Many groups and business owners volunteered time and money to further the restoration of the Huber, with the Historical Society working in various capacities until restoration gave way to renovation. While the focus and make-up of the Huber Board has since changed, the Huber remains a place where generations come together and where pride means preserving the past and looking ahead to the future.