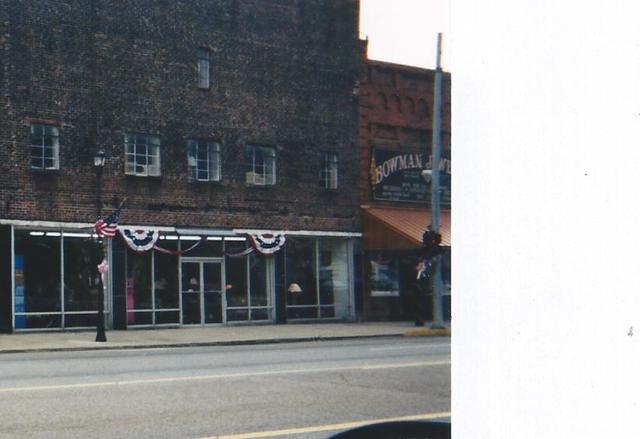 The Cherokee Theatre was located on the main street in LaFollette. It faced the mountains that were in easy walking distance.

The Cherokee Theatre was a brick structure with a decent marquee and a balcony. It served Campbell County as the only walk-in theatre. Closest was the Manring Theatre in Middlesboro, Kentucky. It was owned by Cherokee Amusements, a small theatre outfit in East Tennessee.

The concession stand greeted the moviegoer with very little lobby. I never attended a movie there, but passed it countless times. My dad did go there as a child and remembered the Gabby Hayes westerns.

I am not 100% sure but I have reason to believe the 1966 movie, "Batman" was one of the last if not the last movie ever to play there. Reason being, my dad was visiting a lawyer in downtown LaFollette, and I walked around town. On the marquee was "Batman" and I clearly remember looking at the stills and posters. But peering into the theatre this 10 year old could tell the theatre had closed!

And it would stay closed for several years until a pharmacy occupied that location for years. Just recently I went through LaFollette, and a furniture store has that location. But to a trained eye you can tell many years ago that location gave great movie experiences to a rural audience.

Today LaFollette is served with a small Twin Theatre built back in the late-1970’s called The Movies. You can look at how trashy it is, worn out basically. I dropped by several years ago when "Spiderman" was playing just to look the location over.

The admission was like $2.00 a seat!! And this was a first-run house. It’s a Carmike Cinema, which seems to seek out rural small towns and put no money into a theatre.

It would be a long shot,but if the Lafayette local paper had morgue they might be able to locate the times that Flatt&Scruggs played at the CHEROKEE.At least you could get the ad printed in that day’s issue.But most likely,the paper was a weekly. Still I am sure they ran movie ads.

I’ve found the Cherokee Theatre mentioned in Boxoffice as early as the issue of January 6, 1940. It was operated by the Cherokee Amusement Company

I’ve found mentions of other theaters in LaFollette as well. According to the May 22, 1937 issue of Boxoffice, W.H. Parrott was operating the Capitol and Novelty theaters there, and planning to build a new theater in the town. Parrott is mentioned in later Boxoffice items as president of the Cherokee Amusement Company.

An October 30, 1937, item said that H.A. Johnson and A.J. Anderson would open their new A&P Theatre at LaFollette on November 1. I’ve been unable to find any other mentions of an A&P Theatre. I haven’t found anything about the opening of the proposed new theater of Parrott’s Cherokee Amusement Company, either. It’s possible that Parrott’s announcement was merely intended to intimidate Johnson & Anderson into not building their theater, and when that failed Cherokee eventually bought them out and took over the A&P, either before or after it opened. If that’s the case, it must have become the Cherokee Theatre.

There was also a 600-seat Leach Theatre opened in LaFollette by Nolan Leach in early October, 1945, reported in Boxoffice of the 27th that month. It, too, passed into the hands of the Cherokee circuit, and was closed for a while. Boxoffice of June 5, 1954, said that the Leach Theatre had been taken over by Joe Martin, who had renamed it the Fox Theatre. That’s the only mention I can find of Joe Martin or of a theater called the Fox in LaFollette.

A November 27, 1978, Boxoffice item mentions the twin theater then being built at LaFollette. It was owned by Earl Carroll and Rob Woodson.

Yeah,Your right.Last time I drove by the old CHEROKEE theatre it was selling furniture.I have the Skyway Drive in listed in Lafollette,but also was told of the STARLITE DRIVE in there.But I have no idea of its location.

The little twin theatre was still open and being run by Carmike,But really run down from what i could tell for looking outside into the lobby.

It might be a small world.My mom’s sister married a Parrott and i will ask her if Uncle Clyde was related to W.H.Parrott.

Finally found out that my Uncle Clyde’s family was in the theatre business. The old Cherokee is still standing having long since been remodeled,but you can spot it… drove by it LABOR DAY..Sure would like to get inside , bet the booth is all there…

Could this theater also have been called The Capitol Theater at one time? I saw a photo of a Capitol in Lafollette that later became McCarty Fashion Store. I can find no Capitol Theater in Tennessee on CT.

i have no idea DAVID,hard to get info on small town theatres i have found.