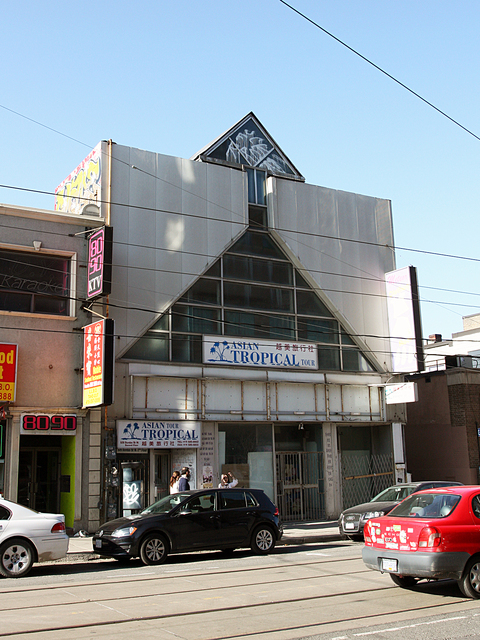 This theatre is located at north west corner of Dundas Street W. and Spadina Avenue behind a bank. This is the same intersection where the even bigger and well known theatre the Victory Theatre or the Standard Theatre at the north east corner located. It opened in 1928 as the Liberty Theatre. It was remodeled in 1938 to the plans of architectural firm Kaplan & Sprachman, together with Harry Dobson and reopened as the 700-seat La Salle Theatre. It was part of the Allied Theatre chain in 1947 until 1955. In the late-1960’s and into the 1970’s it was operating as the Pagode Theatre.

In later years, the theatre was converted into a tiny shopping mall catering to the local Canadian Vietnamese community and more recently, a clothing store.

It would appear to me that the La Salle Theatre on Dundas Street West in Totonto was open far longer than 1955. I’m sure that piece of information is erroneous. Even as an adult I can remember going by the area with the same proprietors or workers still around. If anything, I’m sure it closed towards the end of the sixties.

According to this item from Boxoffice of November 12, 1938, a Toronto house called the Liberty Theatre was then being remodeled to be reopened as the La Salle Theatre:

“Toronto — Under the direction of Kaplan and Sprachman, Toronto architects, the Liberty Theatre, which is being renamed the La Salle, is being remodeled. It will seat 700 persons.

“The reconstruction work, costing $30,000, includes in addition to general modernizing, new seats, indirect Neon lighting, a new air-conditioning system, and new Mirrophonic sound and projection equipment being installed by Dominion Sound Equipments, Ltd.”This web page confirms the 1938 remodeling and renaming, but says that the architect for the project was Harry Dobson. It also notes that the Liberty Theatre opened in 1928, and the house last operated as the Pagoda Theatre in the late 1960s or early 1970s.