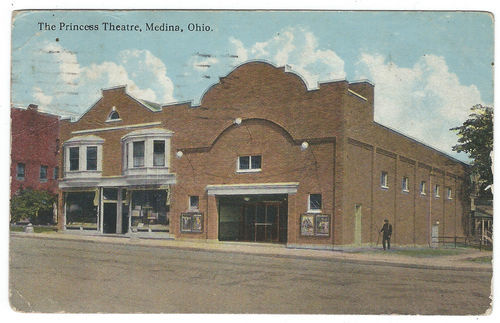 The Princess Theatre dates back to at least 1916. In 1941 it was listed as (Closed) after being part of the Schine Circuit. However it had reopened by 1943. The Princess Theatre is listed in the 1951 Film Daily Yearbook but not in the 1955 edition. The building was later used as a bank and by 2017 was in retail use.

Per the postcard image offered here by me and other remarks the Princess was in operation as early as 1916 or perhaps 1910.

The economy in Medina is very good for the region but public square is no longer considered a good location for any business that requires parking.

At the Princess a Theater, on the evening of the 21st of October, 1921, Arthur Collins, a famous, much-recorded baritone, who was known as “The King of the Ragtime Singers”, was seriously injured when, during a dark scene change he plunged through a trap in the stage which had been left open by a careless stage hand. He recovered enough to sing again for recording, but never regained the stamina needed for live performance, and three years later retired to Florida, where he died in 1933 at the age of 69.

This suggests that the stage equipment at the Princess was more elaborate than it seems from the 1916 post card. The post card layout shows that the theater had a typical Nickelodeon layout, with no fly space, and little room for wings. Perhaps the trap was set up for entrances and exits.

Looking at the Google Street view as of September 2016 it appears the outside front of the building is still as it was 100 years ago.