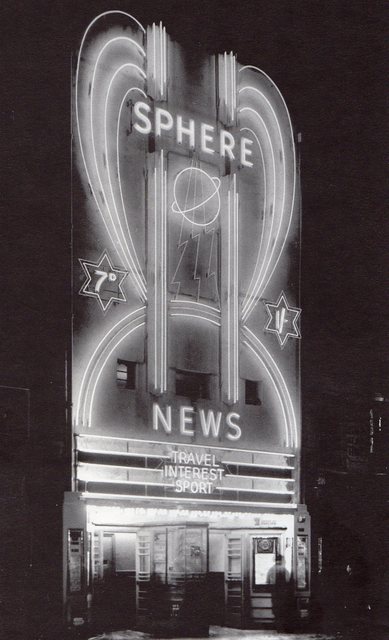 Located at the south end of Tottenham Court Road on its west side. The Gaiety Picture Palace was opened on 4th December 1909. It was designed by architect H.M. Theobald, and had 240 seats, all on a single floor. In 1931, the building was extended at the rear, and 94 more seats were added.

In 1933, it was totally reconstructed by architect Alister G. MacDonald, in an Art Deco style. The exterior was given a wonderful neon display, with large coloured neon swirls, and the name Sphere News in large neon letters. The 238-seat auditorium had large Art Deco style lighting troughs in the ceiling, and various elements of the Art Deco style decoration on its walls. It became part of the Monseigneur News Theatres circuit and programmes included newsreels, travel, interest and sports films.

The Sphere News Theatre was closed in September 1940 when it was damaged by German bombs, and it never re-opened as a cinema. In later years it was converted into retail use, the exterior was then just a plain facade, stripped of its neon. It was demolished in 1975.

A night view of the Sphere News Theatre in 1934:
View link

In the late 50’s and early 1960’s, when traveling up to “town” (London), I always visited a newsreel cinema. The larger train stations usually had a screen with an audience mainly comprised of lonely seniors, Sailors and Soldiers. But the programme always had a wonderful selection of short subject films and news articles from around the world. And Bob Danvers-Walker was the renowned voice of British Pathe' News along with the inevitable crowing rooster. I also did a bit of shopping, saw a live show in the West End and ended my day with a couple of “wets” at a Pub. Then I had to run for the last train of the day back to Southampton. Ah, such happy memories days! I wish I’d had a camera then.