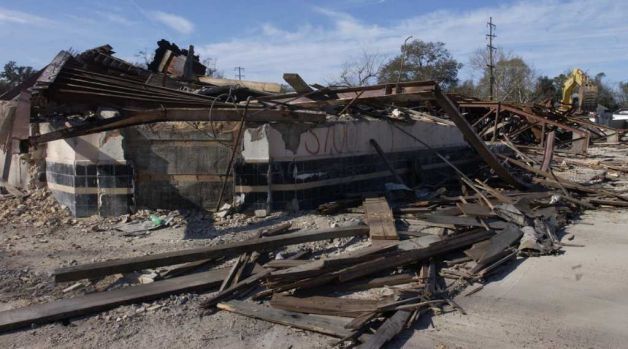 The Lamar Theatre opened in the early-1930’s with seating listed at 775. Did not give the date that the theatre was renamed to the Lamar Art Theatre. Through its life it was operated by Jefferson Amusement Co., East Texas Theatres, Gulf States Theatres and finally Martin Theatres.

The Lamar Art Theatre closed sometime in the early-1980’s. It has since been demolished.

Here is a photo taken shortly before the demolition:
http://tinyurl.com/yfpzdqj

Another photo of the demolition; a dollar store mow occupies the site: View link

It’s been apx. 30 years, so my memory’s hazy…the Roman Catholic Diocese of Beaumont purchased an old Protestant church on 9th Avenue in the mid-1970s and re-christened it as Our Lady Queen of Vietnam as a parish to accomodate the swell of refugees settling in Port Arthur. The diocese wanted the old Golden Tri-Cinema across the street to use as a parish community center. The fellow that owned Golden wouldn’t sell unless the diocese also bought, as a package deal, the Lamar Theater in nearby Beaumont, which he also owned. Both theaters were reduced to showing adult flicks by that time; the diocese figured it would get the property they needed AND clean up the respective neighborhoods. They purchased both theaters, closed the Lamar and put the Golden property to better use than screening skin flicks. NOTE: couldn’t find online references, but both the diocese and the local library likely has material in its archives.

I remember this theatre. Kinda creepy because it was in a bad section of town. I saw the movie ‘Cruising’ there back in 1980.