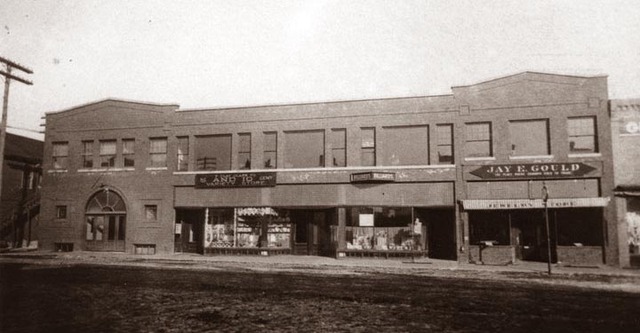 One of the smaller theatres in Glencoe. The Crystal Theatre had seating listed at 298.

The theatre closed in 1956. The building has been demolished and the site is now part of the Security Bank & Trust Co.

Though a few items in Boxoffice refer to the “New Crystal Theatre” in Glencoe, I can’t find any items saying that the original Crystal Theatre there was ever replaced with a new building. There was a Crystal Theatre operating in Glencoe at least into the 1970s, and it was run by members of the Gould family throughout its history to that time. The magazine did mention the Crystal Theatre many times, though. Here’s a sampling of some of those that I found revealing.

The Crystal Theatre in Glencoe was the subject of a brief article in Boxoffice, January 3, 1953. 85-year-old Kate Gould was then still working ar the Crystal, which had been opened by her family in 1909 (though this item says it opened in January, 1907, later Boxoffice items all give what is apparently the correct year.) There’s no photo of the theater itself, but the shot of Mrs. Gould doing a bit of embroidery in the box office is downright Rockwellesque.

If an 85-year-old theater cashier is not sufficiently remarkable, this later article (somewhat longer, but lacking a photo) from Boxoffice of January 2, 1961, says that she had taken a few months off from her job at the Crystal, but intended to return to work in the box office. She was then 93. This items also notes that it was her son, Jay, who had opened the Crystal Theatre in 1909.

Boxoffice of November 7, 1966, took note of Kate Gould’s 99th birthday, and said that she had finally retired as the theater’s cashier a few years earlier, at the age of 94.

Boxoffice of October 9, 1967, published Jay Gould’s death notice, mentioning that Kate Gould would be 100 years old the following Monday. The Crystal Theatre was still open at his time, and had for decades been under the management of George Gould, Jay’s brother.

George apparently handed over the theater to another brother, Howard, for a while, as Boxoffice of June 9, 1969, said that George Gould was resuming management of the theater following the death of his brother Howard. The item said that Kate Gould would be 102 on her next birthday.

A brief item in Boxoffice of December 16, 1974, said that George Gould of the Crystal Theatre at Glencoe had been hospitalized for tests and observation. Another Gould, 79-year-old Mrs. Florence Gould, was admitted to a hospital for tests and observation in 1976, reported Boxoffice of October 25 that year. The Crystal must have still been open, as the item said she was “…still active with the Crystal Theatre, Glencoe….” Kate Gould was not mentioned in this item.

I’ve been unable to find a Boxoffice obituary for Kate Gould. Given the frequency with which she was mentioned in the magazine, I find this odd. Perhaps they ran one, but the issue containing it is missing from the online database.

Another odd thing is that an Internet search on “Crystal Theatre, Glencoe” brings up many listings (usually under the classification movie theaters) for something called The Crystal Theatre Company, with an address of 1706 Judd Avenue North, Glencoe. Google Maps satellite view shows this to be an entirely residential neighborhood. I have no idea what to make of this.

This theater was built by and belonged to my family, it was used for movies as well there was vaudeville done by the Jay Gould family. Jay was also a circus entrepreneur and the theater was then operated by Jay’s brother’s. About the late seventies it was sold to a community theater group called the Buffalo Creek Players. When the theater group became defunct the theater part of the building(on the left in the picture) The building was again sold, was a church for awhile. It has not been demolished. It is still standing and is currently used as a place to store antiques. 07/27/2018 Val Gould

The March 20, 1909 issue of The Improvement Bulletin had this brief item about the Crystal Theatre:

“Glencoe, Minn.—W. G. Gould & Son have let the contract for remodeling the Gould block on Hennepin av., to be occupied by the Crystal theater to F. W. Keehn. An entire new front will be installed.”