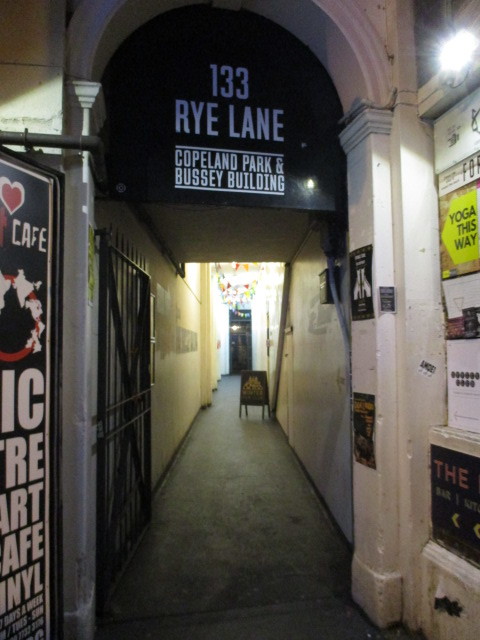 Located in the southeast London district of Peckham. The Electric Theatre was opened in 1908. It was soon operated by Biograph Theatres Ltd. It was closed in December 1915.

In 2008, the building is being used as the ASH Meat & Fish Centre on the ground floor, and The Redeemed Christian Church of God-House of Praise on the upstairs first floor.

By late 2016 the building was vacant – indeed, internally it had been stripped back to decaying bare brick. It is due to be converted into Peckham Market, a venue for work, events, food and music, with offices on the first and second floors and an events venue on the ground floor.

In the meantime, an ad-hoc market occupies the ground floor, while the enterprising folks behind the Rooftop Film Club, based in the adjoining Bussey Building, have converted the second floor into the Winter Film Club.

Repertory screenings of seasonal-themed films are taking place from 1st to 23rd December. I visited on Sunday 18th December to see my favourite big-screen action thriller, “Die Hard”, starring Bruce Willis and Alan Rickman. Despite the designation as a Film Club, membership is not required.

160 Rooftop Film Club deck chairs have been installed. There is a balcony (that, judging by the exterior window line, might once have been a separate, third upper floor) which is home to the bar/concession counter and loose tables and chairs. The digital projector is in the centre of the balcony front, while the soundtrack is relayed (very effectively) through individual headphones. The screen is 16ft by 9ft. With minimal available facilities some imaginative lighting gives a nice ‘cinematic’ atmosphere, while a large number of candles light the entrance stairs – and also the stairs up to the rather dark toilets! Heating is provided by an industrial blower (which is switched off during the film!) and blankets are also available: it all made for a wonderful experience.

However, whether the film was screened in the space last used in 1915 by the Electric Theatre is not so clear-cut, as there are three floors to choose from. The second floor balcony is not raked, and gives all the appearance of a much more recent addition. There is no indication where the projection box might have been. Nevertheless, the second floor, with its very high ceiling, would have been an ideal location. However, even if the Electric occupied the ground floor, this is still a very imaginative use of a building that did once house a cinema, and I congratulate the organisers on their endeavours.

I think it’s safe to assume that the cinema was on the ground floor. In fact, most pre-1910 cinemas were in converted shops.

Yes, Philip, that could well have been the case. I was able to see inside the ground floor: it’s a large space with a relatively high ceiling, ideal for use as a cinema in 1908.