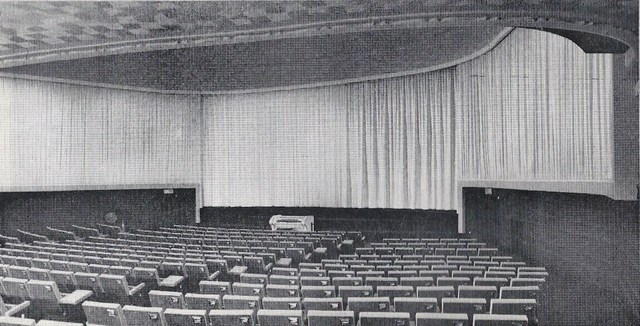 Located in Pinner, a district today in the North of Greater London. The Langham Cinema opened on 9th January 1936. It was built and opened by the Pinner Cinema Co. Ltd, and was soon sold to Associated British Cinemas(ABC) on 14th May 1936.

Designed by architect T.C. Ovenston of the architectural firm Emden & Egan Co. The façade was in white terra-cotta tiles, above which were green tiled mansard roofs. Seating inside the auditorium was provided in stalls and circle levels. The proscenium was 42 feet wide.

It was re-named ABC in 1963, and was modernised by architect C. ‘Jack’ Foster in 1967. The centre of the façade was covered with grey/green slate tiles, and the auditorium was draped in gold coloured curtain material, with new lighting in the ceiling, much of the original decoration was hidden. It re-opened on 26th August 1967 with Robert Vaughn in "The Karate Killers" as a ‘Luxury Lounge’ cinema with new seating installed in the stalls area.

The ABC was taken over by an independent operator in 1977 and re-named Mayfair Cinema. It was closed on 27th January 1979 with Peter Ustinov in “Death on the Nile”. Taken over by the Shipman and King Circuit on 4th February 1979 and re-named Langham Cinema, it re-opened with Goldie Hawn in “Foul Play”. The Langham Cinema was closed on 19th September 1981 with William Hurt in "Altered States".

It was demolished in May 1982, and a supermarket was built on the site, today operated by Lidl Supermarkets, with a Fitness First gym on the first floor.

A set of vintage photographs of the Langham Cinema/ABC:
View link

Please Note That Shipman and King was a division of the same company EMI Cinemas Ltd., same as ABC