Previous Names: Mann 9 at the Grove 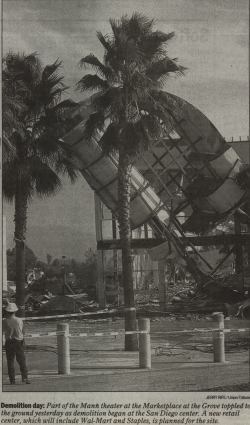 For a multi-plex, the Mann Grove 9 had one of the shortest lives of any theater in San Diego. Established as part of the redevelopment of the ‘Marketplace at the Grove’ shopping center by William Stone Development, it opened to much fanfare on December 14, 1988.

Fronted by a 3 story neon sign that proclaimed itself ‘Mann 9 Grove’ and incorporating the world famous neon Majorette (formerly of the Campus Drive-In, bought and refurbished by the developer for $90,000) into its facade at the northwest corner of the building. The Grove 9 was built at a cost of $2 million and encompassed 36,600 square feet, making it the largest multiplex in San Diego, the crown jewel of Mann’s San Diego theaters. It featured 9 THX approved auditoriums equipped with JBL speaker systems featuring 35,000 watts of power. These features pale in comparison to the fact that the Grove 9 was also reported to be the first San Diego theater to feature drink holders in seat arm rests. Its opening line-up of movies was “Rain Man”, “Dirty Rotten Scoundrels”, “The Naked Gun”, “Tequila Sunrise”, “Cocoon: The Return of the Acused”, and “Mystic Pizza”.

The Grove 9 would then go on to host some the biggest films of the late-1980’s and 1990’s including “Batman”, “Dick Tracy”, the “Star Wars” Special Editions and “Titanic”. Unfortunately, its early popularity would never be replicated as the decade wore on, nor could it overcome the problems of the area that had forced the first renovation of the Grove.

By 1997, the shopping center was largely vacant, and the theater itself had been robbed at least twice in its lifetime (one in 1994 and once in January 1997- with a grenade!). Mann, as part of its ongoing San Diego collapse, closed the theater on 16 October 1998. The last films to have played there were “Holy Man”, “What Dreams May Come”, “Ronin”, “Urban Legend”, “Blade”, “There’s Something About Mary”, “How Stella Got Her Groove Back”, “Ever After”, and “The Avengers”.

It was demolished in February 1999 (the Majorette sign was saved and reused elsewhere on the rebuilt College Grove), having earned the dubious distinction of being the shortest lived multiplex in San Diego history.

Hey Renee – If you stumble upon this webpage someday, a huge thank you for the all those passes that you gave me from 1990 to 1992, when you were an assistant here.

I remember going to this theatre pretty frequently in the 1990’s when I lived in San Diego as a kid. I remember seeing the first Ninja Turtles movie on opening weekend (Sunday) at this theatre and it was PACKED, fun times. Also saw, Robocop 2 Arachnaphobia, fun times!

I really wish someone would put the AMC Sweetwater San Diego theatre in the database.

Great memories at this theater! Saw many of the late ‘80s and '90s blockbusters there: Batman,Batman Returns Indiana Jones and The Last Crusade, Jacob’s Ladder, Dick Tracy, Teenage Mutant Ninja Turtles 1 & 2, Honey, I Shrunk The Kids, Pet Sematary, Home Alone, Back To The Future III, Awakenings, The Witches, Arachnophobia. Whew!!! Miss it, and the Yellow Brick Road arcade next door, and of course, the bowling alley.

To Filmwrath82, I’ve never been to the Sweetwater theater you mentioned, however I googled around and found a theater with the same name in National City, so I believe that is the same one you speak of. I added it today, however I do not have any photos or even much in the way of information about this theater. When it gets posted, you can make some comments and perhaps fill in the gaps for everyone.

Thanks so much Lebowski, I’ll look around and yes you are right, National City, thank you so much for the helpful info :)

I went to this theater years ago, the only film I saw there was “A Perfect Murder” in July of 1998, shortly after that, it was demolished. I went to the shopping center today to take some pics of the shopping center and to see if I could remember where it was located, but I quickly realized that I have no idea where it was located. My guess is that it is where the 24 Hour Fitness now sits, however I am really not sure. can anyone confirm or deny this?

The 24 Hr Fitness occupies the building that used to be the bowling alley. Most of the rest of the original center, including the theater, has been demolished. Sam’s Club sits on the spot where the theater once stood. The Kohl’s store, having previously been occupied by Mervyn’s, along with a few outbuildings are all that remain of the original Marketplace at The Grove.