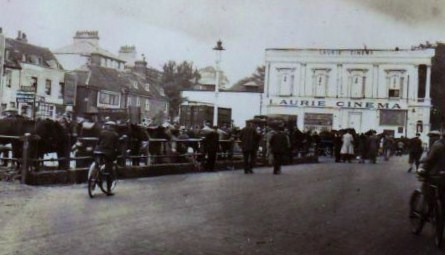 The Laurie Hall was built in 1786 as a Town Hall, with multi-purpose uses. It was a handsome building with Corinthian columns on the first floor of its facade. It was converted into the Laurie Hall Cinema in September 1913. Seating was provided in stalls and circle levels.

The Laurie Cinema was closed in 1939, and remained closed through World War II. It was re-opened in early-1944, and by July 1944, had been re-named Vogue Cinema.

The Vogue Cinema was closed on 13th September 1954 with Harold Warrender in “Intimate Relations” and Jerry Desmonde in “Alf’s Baby”. It was then used for social functions for many years. It was demolished in the 1970’s.

The Laurie Cinema can be seen on the right of this 1930 view of Market Place:
View link