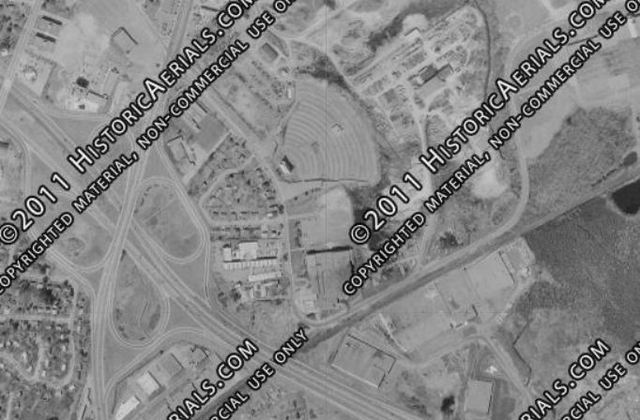 Ken,It gets harder and harder to spot old Drive in sites as you drive down back roads. I guess aerial photos are about the only way. I was enjoyed finding one like the WAYNESBORO DRIVE IN on CT,Watching for snakes in the tall Georgia grass,hoping for a good find like i did at the WOODZO drive in on CT.Yeah, it is getting harder and harder.

Actually, I stand corrected. It was at the back of the parking lot for the Showcase Cinemas, which didn’t exist in 1971.

However…if you look at the historical aerial for 1978, the Dedham Drive-In is obviously closed. And the small building at the far left of the parking lot that has chewed into the former drive-in’s lot? That building is the shiny, new Showcase Cinemas. How about that?

Now we know what, or more precisely who killed the Dedham Drive-In: Sumner Redstone, that’s who!

Also worthy of note is that if you looked at the rear of the Showcase’s parking lot in aerials after it fully swallowed the drive-in, the outline of it’s final layout was visible in the asphalt.

The access to the drive-in was from Elm street. The screen was near Elm street and faced north. I’m pretty sure Redstone owned the drive-in in the mid-70s when I was there. A friend’s mother ran either the concession stand or the whole operation.

Uploaded the aerial from 1969. The other link was broke.

Actually, Michael Redstone bought the land in 1948 and built the drive-in on it. Redstone Management evolved into National Amusements, run by granddaughter Shari Redstone, and the family still owns the land that Legacy Place is built on.

The screen actually faced NE, toward the industrial park and pipe company along Rustcraft Rd. My street is directly behind the screen off of Elm St. and my house faced south (a chain link fence away from the clover leaf for route 1 off of 128). The parking lot for the Showcase Cinemas only partially took over for the Drive In lot, and the rest was consumed by an office park, and access road to the industrial park.