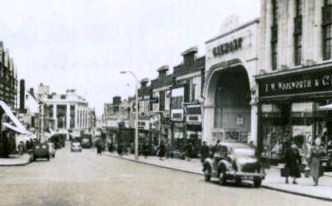 The Surrey County Theatre opened on 24th March 1921, it was built for the independent Surrey County Picture House Ltd. The facade consisted of a large arch, surrounded by white faiance tiles. Inside the arch was the outer foyer, which was open to the elements. Entrance doors to the inner foyer were further inside. It had a cafe, where tea dances were held. The Surrey County Theatre was the first cinema to have a Compton ‘Kinestra’ theatre organ installed. The 3Manual/14Ranks instrument was installed on 7th November 1921.

In 1922, it was taken over by Associated Provincial Picture Houses Ltd., a subsidiary of Provincial Cinematograph Theatres Ltd.(PCT). They were taken over by the Gaumont British Theatres Ltd. chain in February 1929 and it was re-named Surrey County Cinema. One of the managers for many years was Mr. E.C.H. (Reg) Rowland, who had been a London music-hall comedian. In 1915 he wrote the famous song ‘Mademoiselle from Armentieres’.

On 22nd August 1947, the Surrey County Cinema was re-named Gaumont. The Gaumont was given a new facade in 1956, but was closed by the Rank Organisation on 4th April 1959 with Paul Newman in “Rally ‘Round the Flag, Boys!” and Bill Williams in “Alaska Passage”.

The auditorium was demolished and an office block was built on the site. The entrance and foyer were retained and was converted into shop use and today the site is part of the Times 2 shopping centre.