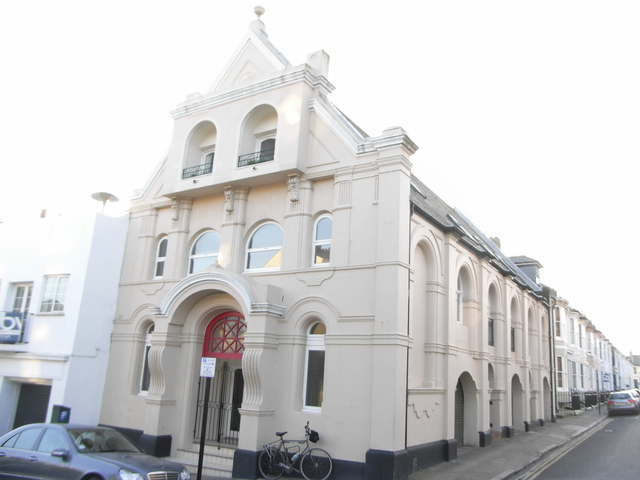 Converted from a Congregational chapel in the early-1920’s, it was originally a silent cinema known as the Sudeley Place Picture House. It was later to be known as the Kingscliff Picture House. Sound (British Thompson Houston) was installed in 1930 by the owner - Mrs Fellows who was also the proprietor of the Tivoli Cinema in Western Road, Hove at this time. There were 380 seats and the proscenium width was 6.40 metres.

On Friday 31st October 1947 the Playhouse Theatre opened with a production of “Viceroy Sarah”, the Kingscliff Picture House having been reconstructed to house stage productions. The theatre was run by Playhouse Productions Ltd. run by Bray Wyndham. Weekly repertory was presented with performances each evening (except Sunday) at 7.45 pm. and a Saturday matinee at 5.00 pm. It was stated that a co-operative spirit was to be fostered and that new actors and playwrights given a chance. Prices ranged from 2/- to 4/10d.

In 1948 on a Sunday evening in the theatre the Playhouse Theatre Club was formed with over one hundred members with the aim of creating an enthusiastic body of playgoers who could meet the cast an exchange points of view with all those concerned with the play itself. Target membership was three to four thousand. A small annual subscription gave members access to the meetings and a small discount on ticket prices. At the end of May admission charges were reduced to 2/-to 4/6d - about half the cost of going to the Dolphin.

In the Gazette of 5th June 1948 was a front page headline “Playhouse may have to close” followed by a report that if attendances did not double in size in the next couple of weeks the theatre would have to close. The report acknowledged the remarkable amount of work which had been put in to make the venture a success. The Playhouse was a professional company and a commercial concern and received no backing from the Arts Council.

Within a few weeks things had improved, an appeal for £1,000 to keep the theatre going raised over £100 in the first week, membership of the Playhouse Theatre Club rose significantly, and box office receipts also improved. The management had stated that if the theatre could fill two thirds of its seats each week then it would make a profit of between 20 and 50 Pounds.

In September rumours of closure after the 40th production (“Almost A Honeymoon”) were denied. The theatre did close for a late summer break on llth September but reopened the winter season on llth October. Two seats for the price of one on Monday nights was introduced in this winter season, as were foreign films on Sundays starting with “Les Disparus de St. Acil” on the 5th December. Twice daily performances of “Treasure Island” was the Christmas attraction taking the theatre into 1949. Then rather quietly the last performance by the Playhouse Repertory Company was given on the 26th March 1949 “The Younger Greysmith” and from the following Monday the building became known as the Picture Playhouse with purely screen entertainment, later in the year it became the Metro Cinema.

Over sixty productions had been staged at the Playhouse in a period of under eighteen months. Most were just for one weeks duration but the longest run was achieved at Christmas 1947 when “Ambrose Applejohns Adventure” lasted from Boxing Day until the 10th January. The standard was not uniformly high, but the Playhouse achieved many excellent reviews in the local press during its period of operation and seems to have deserved better success.

The Miles Byrne circuit took over the cinema in 1949 and it became the Continentale Cinema. Let to George Fernie and family - George acting as projectionist, proprietor and commissionaire, Mrs Sue Fernie was the cashbox girl, personnel officer and part time usherette whilst Miss Ellen Fernie was in charge of sweets and cigarettes! Always regarded as a cold and draughty cinema, the Continentale Cinema tried to alter its image in January 1953 by installing a new infra red heating system. Adverts boasted that it was ‘just like standing in the sun’!

It had been up for sale for many months with a price tag of around £150,000 - with arguments over its future raging. Locals want it to remain as a cinema / theatre / community centre, the National Youth Theatre expressed an interest in purchasing it as a base for its theatrical ventures, when it was acquired with planning permission for replacement with three town houses by developers.

Subsequently, the building was completely gutted and four houses constructed within the shell of the old building.

I work as freelance projectionist and often worked at this cinema if I had nothing else to do. All the equipment was old but worked. It was heated by a number of wall mounted gas fires. As for the films?
Yes it did show so called sex films, but it also ran its fair share of first and second run films over the years. Mr Miles Byrne and his partner were also distributors of “B” movies for many years. In 1980 I had the chance to buy this chain of cinemas from Mr Miles Byrne’s, having worked in most of the I turn the offer down.

Out of interest, this was one of a chain owned by the Miles Byrne’s group. When I was offered the chain in 1980, the package was made up of twelve cinemas.

Back to 1970s Brighton! The Continentale was just round the corner from my seafront hall of residence. There were advantages to teacher-training in Sussex! I saw “The Killing Of Sister George” here, amongst others. I recollect the gas lighting on the walls. Admission then was 35p, compared to 55p at the Kingswest Odeons. The advertising across the front proclaimed it as “Brighton Film Theatre”, an attempt, no doubt, to borrow some respectability from the real BFT. It was possible to hear the radio playing from within the box and on more than one occasion the projectionist showed the reels in the wrong order!

A photo of the Continentale before closure here:–

Here is a link to a page showing a vintage photograph and a potted history:
View link

I remember going to the Continentale back in 1963, when on holiday with my late father. We went to see a double horror show. I remember the tabs were very noisy when they opened and closed. Several years later I visited the box. If I remember correctly they had Kalee 12s, but I can’t be sure. Is there anyone who knows for sure?

Another photo, just after closure, here:–

Yes Kalee12s they were Davell. I used to work at the Paris cinema in the 50’s as projectionist, and did some spare time work/helping out in Kemp Town. A cold place in the winter, but so many interesting people and such charm. great memories. I first showed “The boy with the green hair” there. Miss those day.