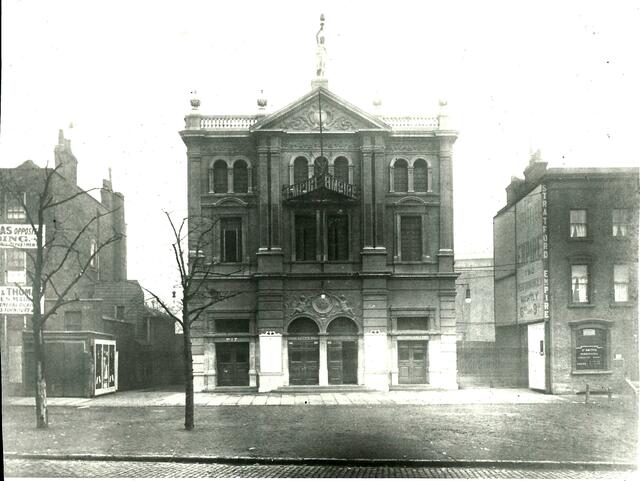 Located in Stratford, east London. The Empire Palace of Varieties was opened on 3rd April 1899. It was part of the London and District Empire Palaces, which soon became the Moss Empire Theatres Ltd. chain headed by Edward Moss and Oswald Stoll.

Designed as a variety theatre by noted theatre architect W.G.R. Sprague, the exterior was in a Neo-Classical style, and the facade was topped by a female figure, holding up a globe, which was illuminated from within by an electric light. Inside the auditorium seating was provided in orchestra stalls, pit, dress circle, balcony and gallery levels with a series of boxes across the rear of the dress circle. The seating capacity was probably around 2,000. One of the features in the auditorium was a sliding roof, to allow for ventilation (something that would have been welcome in the days when smoking was allowed in theatres). The stage was 40 feet deep and 70 feet wide.

From 1906, the Empire Theatre was equipped to screen films on the Bioscope projector as part of the variety programme and this continued for many years.

The Empire Theatre operated successfully until Ocober 1940, when the building received a direct hit from German bombs. The wrecked building stood for many years until it was demolished in 1958.

An office building named Empire House was built on the site.