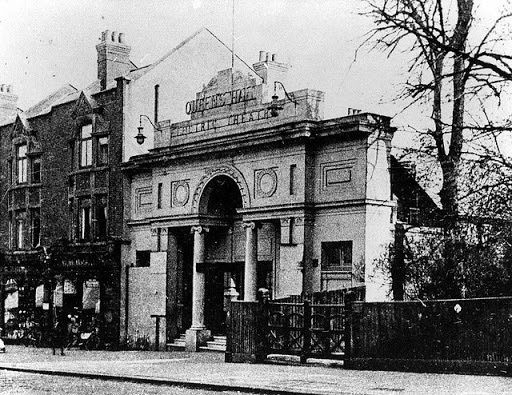 Located in the southeast London district of Sydenham. The Queen’s Hall Electric Theatre was a purpose built cinema that opened on 29th October 1910. It was designed by a Mr Parnacott and had an attrictive facade, with columns on each side of the entrance.

The cinema was taken over by the Army Service Corp. in the spring of 1917, during World War I, and it was closed. It didn’t re-open until 30th August 1919. In late-1936, alterations were carried out and it was re-opened on 1st January 1937 as the Classic Cinema.

It was re-named Naborhood Cinema from 7th May 1939 and was taken over by Marks Circuit Cinemas of Manchester. The Naborhood Cinema recieved some slight bomb damage in 1943, and was closed. It never re-opened and was demolished in August/September 1953.

A vintage photograph of the Queen’s Hall Electric Theatre, soon after its opening in 1910:
View link