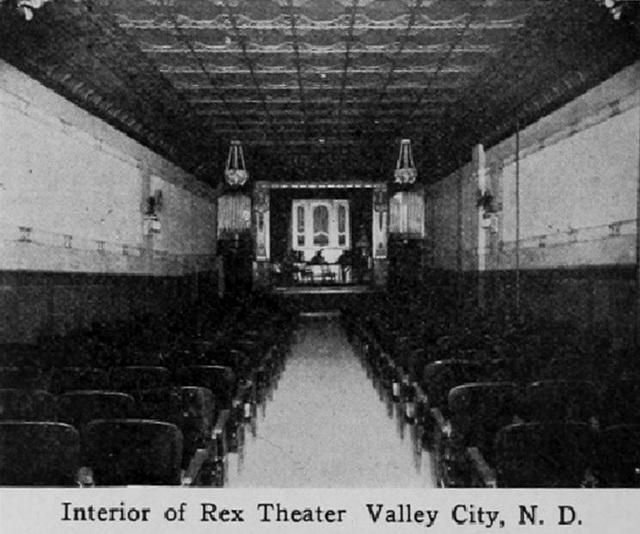 The Bijou Theatre was opened in 1909, replacing an earlier Bijou Theatre that was destroyed by fire. By 1911 it had been renamed Rex Theatre. In 1935 it was owned by John Pillar. The theatre was much smaller than his Pillar Theatre across the street on Central Avenue.

The April 4, 1914, issue of The Moving Picture World said that the Rex Theatre in Valley City had 276 seats. I guess they squeezed in a few more later.

The Rex Theatre was mentioned in the September 5, 1912, issue of the Valley City Weekly Times Record.

This is the information I got from the Barnes County Historical Society Museum at 315 Central Ave. N. Valley City, ND. The Rex was previously known as the Bijou Theatre . In 1909 a fire in the kitchen of the neighboring Burnham’s Cafe burned the Platou block and the Bijou entirely. The Bjou was rebuilt in 1909, but by 1911 its name was changed to the Rex. The REX THEATRE largely remained the Bijou form 1911-1913 when its interior was greatly updated adding the most significant feature as the first pipe organ to be installed i a theater in North Dakota. “I can give o reason at this time for the name change, perhaps it was the new owners Misters, C.A. Robinson and N.A. Burch” The vaudevillian thater was now equipped to show moving pictures as well . It is unknown what this did to the locally famous Bijou Orchestra. Fourteen Reasons whey the REX is the best moving theater in the state. The Rex Theater was purchased by John Piller in 1919 and remained a Vaudeville center inot the 1920’s. it lasted through WWI and WWII but was finally closed by its last owner, Larry Bonaventura, in 1950 to open the new OMWick Thater. Its building is now a part of the Rudolph Square apartments. (source:Barnes County Historical Society and Museum, 315 Central Ave. N, Valley City, North Dakota. 58072 ph# 701-845-0966..author of article unkown.)

sorry about all the misspelling in the last article.