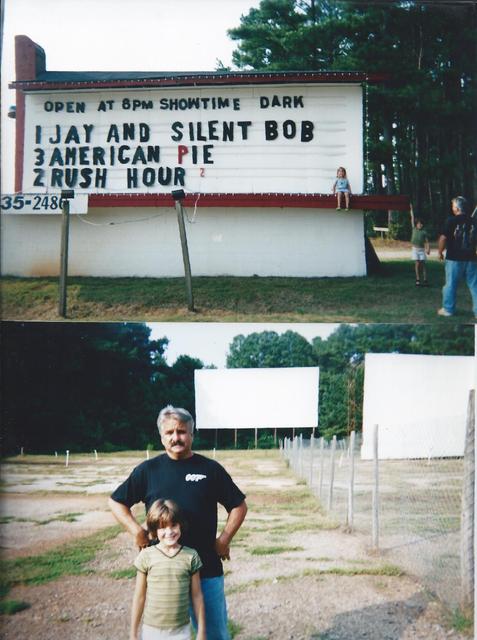 Any further information on the Commerce Drive-In would be appreciated.

Would like to see the photo if the fence screen.

I got the photos what’s a “fence screen”?

OH,you meant “of the fence screen”,not if. Nick, would have to get that picture for you ,but we saw the last “SUPERMAN” movie on a Fence. No kidding.At the Fun-Land in Tampa.

@Mike: Regarding the marquee title layout, the explanation is pure laziness and a void in professionalism. They switched films from one screen to another, and instead of rearranging the titles on the marquee, they just rearranged the screen numbers. Nauseating, but typical of a large chain (U/A) which didn’t care enough to provide experienced management or competent supervision.

I uploaded an set of aerials here, you can see how fast the trees take it over.

The guy who managed this place, really, really, really wanted no one to take pictures. Supposedly he’d show up out of nowhere in his white truck at all hours whenever anyone even tried to photograph the marquee. He was really weird about it. So now that it’s gone, if anyone who has pictures would post them here, that history would really be appreciated.

I have the picture…..lousy drive in ….

I never went here, but I know it was here in late summer 2001, because mom and I would pass by this place on our way to my grandmother’s house. It did close in the early 2000’s and there’s literally nothing left of the place now.

The Commerce Drive In, built originally as a single screen in 1955 as a 300 car D/I by J. E. Jarrel & his wife Annabob & was a really cool drive in , back in its day and we enjoyed all 3 screens, right up until the end 12-25-2000 ! I Guess you just had to go there watch movies and know the place & the fine crew that operated it to appreciate it. This photo is taken directly from the front of the concession porch, which was the place where you could easily see screens 1 & 2 ; but When one was parked on the majority of the field – you didn’t see the other screen , due to the pitch of #1 to the left field & that of screen #2 to the right opposing one another, so to me this was perhaps the coolest redesign of an existing drive in ever !