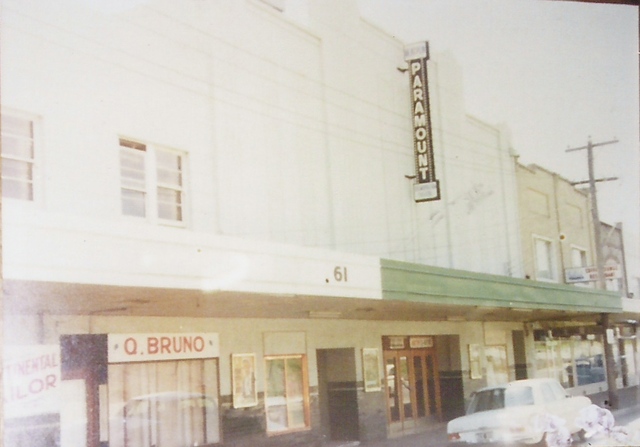 Located in the south-east Melbourne district of Oakleigh. The Paramount Theatre was opened on 19th June 1922 with a triple-bill programme; “The House Without Children”, “The Barnstormers” and “Comrades”. Seating was provided for 1,019 in the stalls and 387 in the circle.

In May 1931 it was taken over by Hoyts Theatres, but they only operated it until November 1932. It was closed for alterations and the installation of a Western Electric(WE) sound system, and re-opened on 12th November 1932. Further remodelling was carried out in 1948. In April 1955 it was equipped to screen VistaVision and CinemaScope films, and Richard Burton in “The Robe” was the first CinemaScope film to be shown at the Paramount Theatre. It was closed in 1971.

The auditorium was gutted by a fire on 10th May 1979 when the building was hit by lightning. It was rebuilt as a twin screen cinema, which was planned for 582 seats on the ground floor and 300 seats upstairs, but it never reopened. It stood empty and boarded up for many years.

The building is located on the other-side of a fly-over road from the main shopping centre of Oakleigh, so it seems rather isolated. In 2010, the building was in use as offices for a social welfare department. By 2014 they had vacated the building and it was set for demolition. It was demolished in June/July 2015.

Demolition of the theatre started last week, Thursday or Friday 26-Jun-2015. To be replaced by yet another block of apartments. I’ve got a couple of photoshttps://www.flickr.com/search/?user_id=47322737%40N00&sort=date-taken-desc&tags=paramounttheatre&view_all=1

Used to go there as a kid. Shame.

The Paramount Theatre Oakleigh – To complete the story – Ron Kitchen acquired the Paramount in 1946, and ran the theatre until 1966.

Tribute: Ron Kitchen was a builder by trade who came to own a theatre. During his time at the Paramount he installed CinemaScope & VistaVision & was regarded as a switched on Exhibitor & Showman. The Paramount advertised programs under the newspaper banner of “Suburban Theatres Tonight”. Ron’s close personal friends were industry based, such as the late Brian Casey (Universal Pictures) & the late Keith Milroy (British Empire Films), & this writer was very happy to call him friend. Ron had experienced severe personal tragedy, yet was always affable, and in addition, a much respected member of “The Society of Cinema Pioneers”. . “Cosmopolitan Motion Pictures” through Peter Young purchased the building in 1966, and ran as a cinema, showcasing Greek product until 1971. The Paramount stood empty and was shuttered for many years, & then finally demolished in 2015 – VALE RON KITCHEN – Contributed by Greg Lynch –