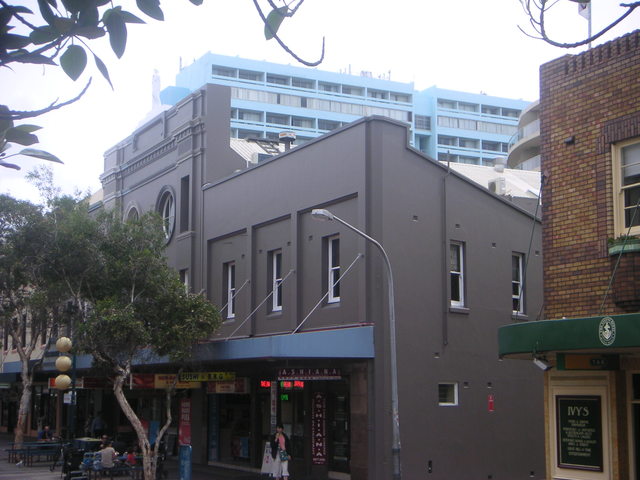 Located in the Sydney beachside district of Manly. The Britannia Theatre was built in 1915, and was operating by June 1916. It was situated in Sydney Road, just off The Corso, the main street in Manly. It was designed by architectural firm Hassall & Stockham.

In 1920-1921 it was known as the Britannia De-Luxe Theatre and had a Grand Symphony Orchestra to acompany the films. In 1923, it reverted back to the name Britannia Theatre and was taken over by the Smythe family.

It was re-named Olympic Theatre in 1924, after the success of Australian athletes in the 1924 Paris Olympic Games. In 1928 the theatre was renovated with altertaions carried out to the plans of architectural firm Kaberry & Chard. When the Smythe family opened the Embassy Theatre in Manly in 1933, the Olympic Theatre was closed as a cinema (they also operated the Rialto Theatre in The Corso).

The Olympic Theatre became a live theatre and staged variety acts. It had closed by the late-1930’s, and was sold to Dobbs Bros. Furniture Stores. In 1954, Walton’s Stores were operating in the building. During the 1970’s the building was in use as an auction room, and in 1983, it was mostly demolished for the construction of a shopping arcade. The facade still stands today as the entrance to Pacific Point Arcade.