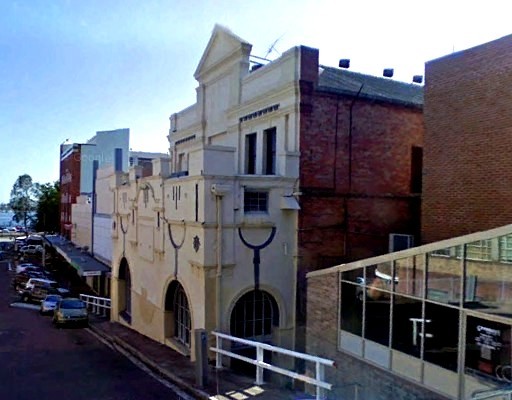 Opened on 12th January 1910 as the Masonic Hall, the entrance was on Thorn Street. On 8th April 1915, it opened as a cinema, known as the Lyric Theatre. It was closed on 6th February 1926 for major alterations. These included reversing the theatre and making a new entrance on Wolfe Street near the corner of King Street. A balcony was also added and the architects for the alterations were Newcastle based Pepper & Jeater.

It re-opened on 14th May 1926 with Wallace Reid in "Broken Laws" and was under the direction of the J.D. Williamson Amusements Ltd., part of Greater Union Theatres. After being equipped with sound equipment in 1930, it was closed and converted into a mini-golf course, which had closed by 1931, and cinema use resumed. This didn’t last long either, and it was converted into a billiard club. By 1941, the Lyric was in use as a hostel for servicemen.

Re-opened as a cinema by Great Union Theatres in May 1942 with Abbott & Costello in "Ride ‘em Cowboy". In 1959, it was re-decorated and re-named New Lyric Theatre, screening art house films, it opened with Jacques Tati in "Mon Oncle". It was closed in October 1987 with Laurence Olivier in "Macbeth".

Closed for several years, it was taken over by an independent operator and re-named Lyrique Theatre, it re-opened on 12th August 1971 with "Adams Rib". Renovations had been carried out by architect Russell Skinner, who exposed beams in the ceiling. It was closed in March 1984 for a planned twinning, which never happened, and re-opened in September 1984. The Lyrique Theatre was closed in the late-1990’s and remained unused until March 2020 when demolition began. The front façade and the rear wall have been retained and housing will be built on the site of the auditorium.