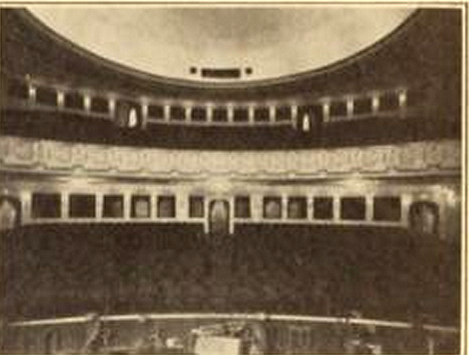 Ufa’s main premiere theater in Berlin’s western district of Charlottenburg. The Ufa Gloria-Palast opened on 26th January 1926 with “Tartuffe”. It was designed in a Gothic style by architects Ernst Lessing and Max Bremer. It had a seating capacity of 1,200. The cinema was the site of the first German ‘talkie’, and site of the first showing of the classic “Der blaue Engel”(“The Blue Angel”).

It was destroyed by allied bombs in November 1943, leaving just the ruins of the outer walls.

A new Gloria Palast cinema was built on the site, and was set within an apartment building. It opened on 2nd January 1953 and closed on 6th August 1998, to be converted into a Benetton clothing store.

The architects of the original Ufa Gloria Palast were Ernst Lessing and Max Bremer who designed a magnificent Gothic styled cinema that seated 1,200. As stated above, this was sadly destroyed by bombs in 1943

The new Gloria Palast was an entirely different building on the same site, contained within an apartment building that was constructed in 1953. The cinema was upstairs on the first floor and was designed by Siegfred Fehr and Gerhard Jackel. It was a single floor cinema (with no balcony) and seated 954. There was also a small 190 seat cinema in the basement which was called the Gloriette.

Both screens closed on 6th August 1998 and were immediately stripped out. It was converted into a Benetton clothing store, but being a Listed building, many of the original decorative features have been retained.

More infos and photographs on this theater (and many others) can be found on the German language only Berlin Movie Theater Guide – www.kinokompendium.de: Gloria Palast & Gloriette (1948 – August 15th 1998)