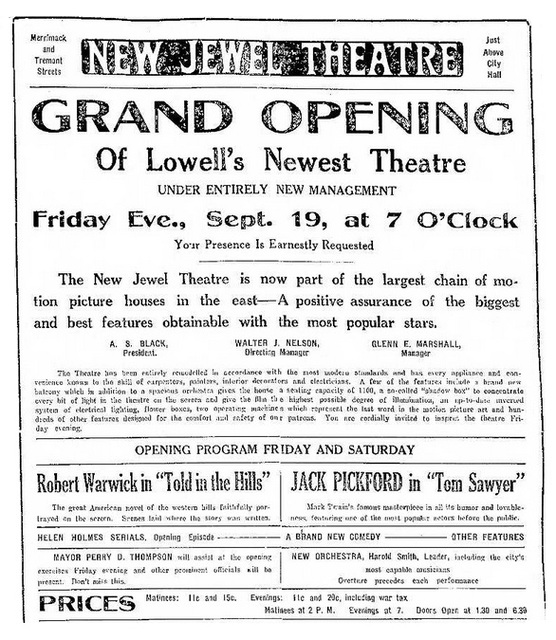 The "New Jewel Theater" was built by Charles Harfort in 1913 at 507 Merrimack St. He built it upon the the success of his original Jewel theater across the street that operated as the Royal Theatre when he vacated. Motion Picture Magazine reported in 1913 "CHARLES HARPOOT, owner and manager of the Jewell Theater, Lowell. Mass., finds business very good. In fact, trade is really too brisk, and on this account, Mr. Harpoot has purchased land on the corner of Tremont and Merrimack Streets, upon which he is building a theater that is to be thoroughly modern, fireproof and up-to-the-minute in every way. The new house will have a seating capacity of about 1,200 on the ground floor, as no balcony is being built. Mr. Harpoot’s plans call for a lobby that will be 27 feet wide and 50 feet deep. The old Jewell Theater will be closed when the new Jewell Theater opens to the public, which should be by Labor Day, provided no unforeseen delays hold things up. Mr. Harpoot has a prominent location for his theater. Just opposite his old house, and feels that he will retain his former trade and add to It. The Jewell Theater will open as a moving picture and illustrated song house: no vaudeville will be offered. Mutual service has already been contracted for from the Boston offices of that corporation. Mr. Harpoot knows his business, and knows the conditions of the trade in Lowell, and should have no difficulty in making good on his new venture which will cost him $40,000, or very near to that figure.
Work is now really under way for the new theater being built at Lowell. Mass. on Merrimack Street. This house, when finished, will play to photoplay programs."

As the “Jewell” Theater, it is listed in the 1927 Film Daily Yearbook with 900 seats, and open daily. The seat count appears incorrect, as so often happens in the FDY theater lists.