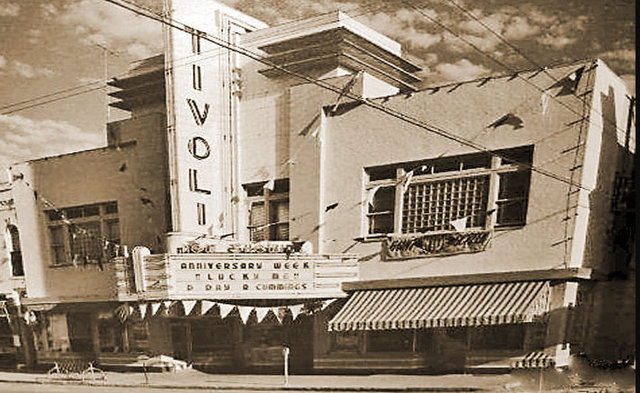 The Tivoli Theatre was opened September 28, 1939, replacing an earlier 300 seat Tivoli Theatre at 110 E. 3rd Street. The new theatre boasted having a dance lounge, located off the smoking lounge.

The location of the Tivoli, currently given above as Marysville, is actually Maryville. It was the same city in which Tivoli operator C.E. “Doc” Cook’s brother, Ray, operated the Missouri Theatre, which had been built by their father in 1926. Though the Missouri survives, the 1939 Tivoli has been demolished. The first Tivoli, which was in operation by 1929, was at another location and might still be standing.

I’ve been unable to find the opening date for the second Tivoli, but Boxoffice of September 9, 1939, reported that the Oklahoma Theatre Supply Company had recently installed 800 Heywood-Wakefield seats in the new house, so it must have been nearing completion by then. I’d surmise a late 1939 opening. I haven’t been unable to find a closing date, either, but Boxoffice of March 30, 1970, said that C.E. Cook’s son Jim was at that time operating both the Tivoli and the Dude Ranch Drive-In (built by “Doc” Cook in 1950) at Maryville. An item in the February 1, 1971, issue of Boxoffice indicated that the Tivoli was still in operation.

Boxoffice ran this article about the Tivoli in its issue of May 25, 1940. There are a few photos of the theater. In the exterior photo, a sliver of the adjacent building to the left shows an arched window and distinctive details on the parapet wall. These details can be seen in a current Google Street View, so that building survives, but the site next door, where the Tivoli was located, is now a parking lot, so the Tivoli has been demolished, except for what was probably the common side wall of the two buildings.

An additional photo of the Tivoli’s downstairs lounge area, called the “Rumpus Room,” can bee seen at upper left on this page in boxoffice of April 7, 1951.

Boxoffice of October 2, 1954, noted that C.E. “Doc” Cook had just celebrated the silver anniversary of his Tivoli Theatre in Maryville, so the first Tivoli must have either opened, or been acquired by, Mr. Cook in 1929. A 1938 Boxoffice item said that Cook intended to convert the old Tivoli’s building to another use when the new theater opened, so the old Tivoli building might have outlived its successor and could still be standing. A 1970 Boxoffice item said that the old Tivoli had been on the south side of the town square. Google Street View shows that block to be largely intact and to consist mostly of older buildings, so the odds of the old Tivoli’s survival are high.

RAND McNALLY lists no MarySville in Missouri, it's
Maryville.

PLEASE TAKE THE S OUT, IT’S

I can understand the mistake of Marysville and Maryville, Some of the trade magazines list it both ways. The opening year had to be 1939, the Tivoli was listed at 327 seats in 1938 and 750 in 1939.

The original Tivoli was at 110 E. Third St. opened June 26, 1930 likely on a ten-year lease. C.E. “Doc” Cook had both worked for and was the third and final owner of the Fern Theater in Maryville which had opened in 1910. The diminutive theater was advertised as “Joe Cook’s Cozy Tivoli.” Not only was the theater undersized but it was potentially unsafe. With no exits on the side due to the proximity of neighboring businesses and no functional exit at the rear, the inescapable conclusion was that the theater – if packed – would be inescapable in the event of a fire. So Doc imagined an improved location which would eventually have seven exits. That became the “new” Tivoli at 117 W. Third St.

The original Tivoli was supposed to have closed Sept. 26, 1939 with the film “Four Feathers” but would actually close Sept. 30, 1939 to honor a contract for the film, “Honor of the West.” A grocery store just up the block would take over the original Tivoli converted it for retail purposes. That building was a retail shoe store was of the mid-2010s.

The new Tivoli would launch Sept. 28, 1939 showing “Blondie Takes a Vacation” plus the “March of Time” newsreel and a Donald Duck cartoon. The new Tivoli had a large stage, seating for 800, and a dance lounge. The Tivoli Building also had retail neighbors in the Tivoli Fashion Shop and an ice cream shop. The theater would be converted to widescreen to accommodate CinemaScope in 1954. The Tivoli operated continuously until 1973.

Cinema Entertainment Theatres Brian Wunder and Gregg Brunk re-opened the theater just months later operating it until summer of 1976 before closing again. Cinema Entertainment would go on to operate the Missouri Theatre in downtown and create the South Cinema Drive-In in 1977. At the Tivoli, all was not lost as Roach and Roach Theaters took on the theater in September of 1976 and operated it until its closure years later.