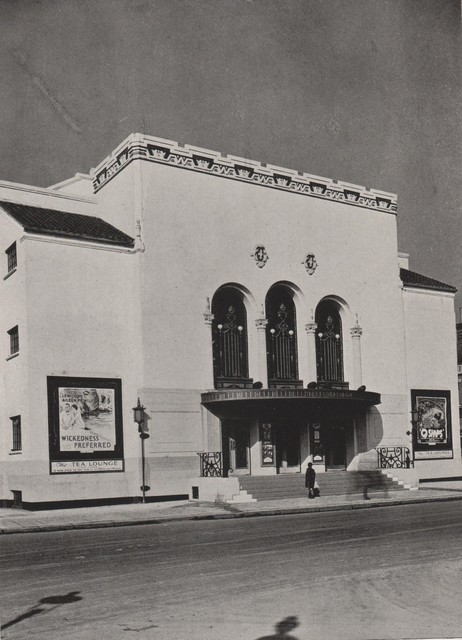 Located on Richmond Road at the corner with Oak Lane. The Twickenham Kinema opened on 15th October 1928 with Billie Dove in "The Beautiful Fraud". It was a project of Joseph Mears Theatres Ltd. and joined the other Kinema’s in the circuit located in Kensington, and later one in Richmond and another in East Sheen.

The Twickenham Kinema had a 35 feet wide proscenium and a small stage, with dressing rooms. The Kinema was equipped with a Compton 2Manual/7Ranks organ. It was equipped with a Western Electric(WE) sound system. There was also a tea lounge cafe for the convenience of its patrons.

On 29th June 1940, the Twickenham Kinema was re-named Queens Cinema. This was to remove the Twickenham name in the possible event of the German military invading the country who would be able to determine their location. Within six months it was requisitioned by the Government, for wartime use as a furniture store. In 1944, it was purchased by the Odeon Theatres Ltd. chain, and re-opened on 24th December 1945. It retained the name Queens Cinema until 8th May 1950, when it was re-named Gaumont.

The Rank Organisation closed the Gaumont on 1st December 1956 with Aldo Ray in "Nightfall" and Gary Merrill in "Bermuda Affair". It had never been fitted for Cinemascope.

Later demolished a petrol station was built on the site, by 2010 it was a Shell Service Station.

I remember going there to see “Mr Pastry” films and Davy Crockett".
Not to sure if I remember an organ being there. I still know a guy who worked there as a projectionist in the 1950’s.
Next time I see him I shall ask about the organ and CinemaScope being installed at the theatre.
The building was white stone outside with steps going up to the entrance doors, you can see a small picture here:
http://www.john.byethost6.com/cinemas.htm
There is a building still standing (2010) left of the petrol station site of the Gaumont which was an early silent cinema.

The chap I know who worked there is in his late 80’s now, agrees they never had CinemaScope fitted. I thought perhaps they did as I remember “Lady and the Tramp” being shown at the Gaumont, but it seems Disney made a ‘Scope version and a “normal” version of that film.