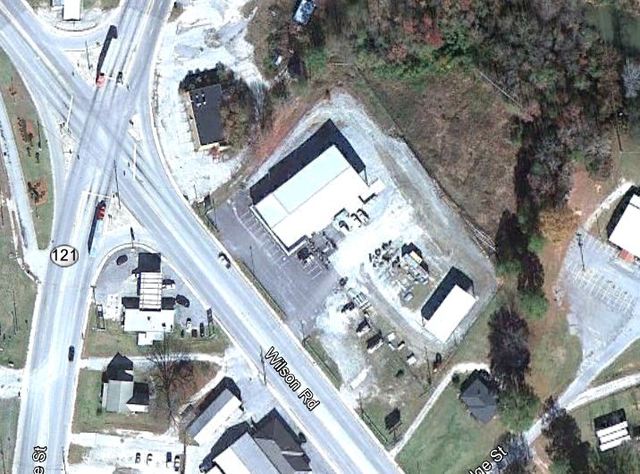 The Cloverleaf Drive-In opened in 1952, and operated well into the 1970’s. The last time I drove through Newberry some of the screen was up, but most of it had gone.

I remember stopping at stop light near the drive-in with my dad in 1969, "Marlowe" was on the screen. Funny how you never forget that. Being at the stop light I saw about 45 seconds of the movie. Much later in the 1980’s I stopped and took a picture from the booth of the screen. It was in better shape then, than it was a couple of years ago. It parked 275 cars and was owned by Cloverleaf Drive-In theatre.

The Cloverleaf Drive-In was located on the US 76 by-pass at SC 121 in Newberry. I saw many a movie there. The US 76 by-pass is also known as Wilson Road. This was about 2 miles from the downtown area. Today the city has expanded all the way out to that intersection along Wilson Road. In the 1950’s and ‘60’s, that was considered out in the country. There was never a drive-in at SC 219 and Wilson Rd.

It was a favorite place of Newberry College students. They would put two people in the car and several in the trunk. After paying admission for the two, they would drive down near the front and let the others out.

I worked at the Cloverleaf Drive-In Theater in 1965 and 1968. It was at the intersection of SC Hwy 121 and US 76 next to Haile’s restaurant. It was on land leased from the West family and was operated by Fulmer Wells and “Dutch” Albrecht, two men who each had his own “inside” movie theater in downtown Newberry. Dutch had the Ritz theater and Fulmer had the Wells theater (but the Wells theater had burned around the late 50’s).

Jeff1..do you have any pictures?

Sorry. Don’t have any photos. But next time I see a member of the West Family (who still own the property) I’ll see if they have any.

That would be great!!

Newberry Observer, April 8, 1952, reports that the Cloverleaf Drive-In would have its grand opening April 10,1952 showing the movie “The Gal Who Took The West.” Mr S.L. Stallings is listed as the owner/operator and article says capacity is 270 cars.

I have a picture of the booth will try and find it….inside shot.