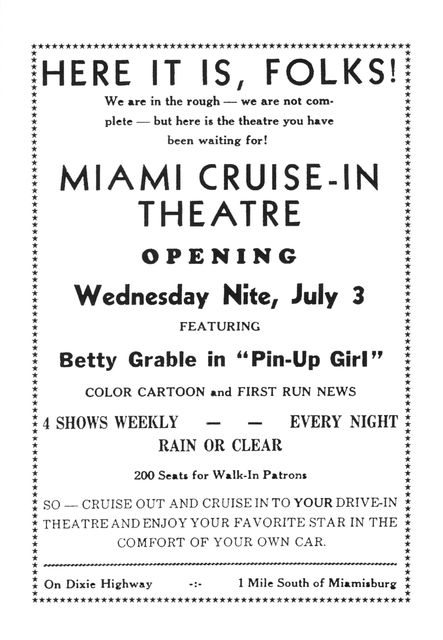 The Miami Cruise-In Auto Theatre had originally planned to open May 1, 1946, but interruption in construction due to weather and late delivery of essential material and equipment delayed the opening for another two months. Even then the exterior of the theatre had not yet been completed. The theatre’s grand opening advertisement stated “We are in the rough - not yet complete - but here is the theatre you have been waiting for!” The Miami Cruise-In Auto Theatre finally opened on July 3, 1946, featuring the 1944 musical “Pin-Up Girl” with Betty Grable, John Harvey and Martha Raye. In addition to the feature film they also featured a color cartoon and first-run news. It was owned by a partnership of W.H. Mooney with Dave and Lou Clemmer. Eventually Edward and John Parker would be operators. Built at a cost of $43,000 the cruise-in had a car capacity of 500 cars parking on ten ramps with the concession stand located on ramp four. It had DeVry projection equipment and Altec Sound. The screen tower was 50 feet wide and 43 feet tall. It was eventually replaced by a CinemaScope screen tower. Two hundred reclining chairs sat in the first ramp for patrons who wanted to get out of their car and stretch their legs.

According to residents who remember the drive-in, the Miami Cruise-in Auto Theatre was one of the best kept theatres in the area. Underneath the screen tower was a number of rooms where Lou Clemmer and his family lived for a short period of time. During the summer flowers were planted all along the base of the screen tower and around the ticket booth. “The Miami was my local drive-in”, said Scott Scarborough. “Right down the street from the Miami was this monsterous railroad bridge - a steel behemoth built in the 1920’s. Right in the middle of every movie a train would come chugging through town. The engineer would always lay on his whistle. I am sure it was on purpose” Not all of the movie watchers paid to see the show according to Scott. “The Cruise-In was built right next to a trailer park. Residents would pile onto their roofs to watch the movies”.

The Cruise-In was bought by Cinema 40 Inc. on April 1, 1983. On April 14, the theatre began advertising that it intended to show two X-rated movies “Inside Desiree Cousteu” and “Obsessed”. These were canceled when the company was informed that this would violate township zoning regulations. Two months later, however, the Miami Township police raided the theatre and confiscated the two X-rated movies being played there. They arrested the projectionist and the theatre manager on charges of pandering obscenity. Gary Cunnoe, then Miamisburg Court prosecuror, said the raid was conducted in response to complaints from neighbors near the theatre that could view the movies from their homes. The Miami Cruise-In Auto Theatre never reopened. A flea market opened in the summer of 1986. There were plans to reopen the cruise-in but they fell through in 1987. The screen tower was demolished and the property sat empty for several years. There are storage units and a convenience store on the property now.

I found this drive-in located on FOUR DIFFERENT ROADS!??

Route 6 which Google puts it on 6th Avenue?

Route 5 which Google puts it on 5th Avenue?

It looks like Google has the Dixie and 25 as the same road?

We really could use an address, more info and photos on this drive-in???

The correct address is:

I love the cool title of this drive in .