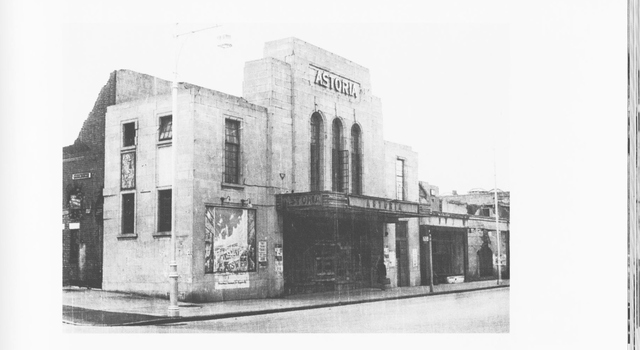 Located in Cliftonville, a suburb of Margate. The Astoria Cinema was a conversion of the Palladium Garage. It was one of several Astoria cinemas opened by a small independent circuit, in south-east England coastal towns which also included Brighton and Southend, all designed by noted cinema architect E.A. Stone.

The exterior was faced in white Croft stone, with the entrance at the left-dand side of the building, and the auditorium running parallel with Northdown Road. Inside the splendid Art Deco style auditorium, the seating was on a stadium plan, with the circle on raised section at the rear which did not overhang the rear stalls. The cinema was equipped with a Compton 3Manual/5Rank organ which was opened by organist Reginald Hayward. There was an 18 feet deep stage, with dressing rooms, and a restaurant for the convenience of patrons.

The Astoria Cinema was acquired by Asssociated British Cinemas(ABC) in June 1937, and the Compton organ was removed to their new Savoy Cinema in Stoke Newington, London.

German bombs closed the Astoria Cinema on 20th July 1940, and the building was severely damaged on another bombing raid on 24th September 1940, two further air-raids destroyed the building.

A garage stands on the site today, in 2009, operating as a Total Service Station.