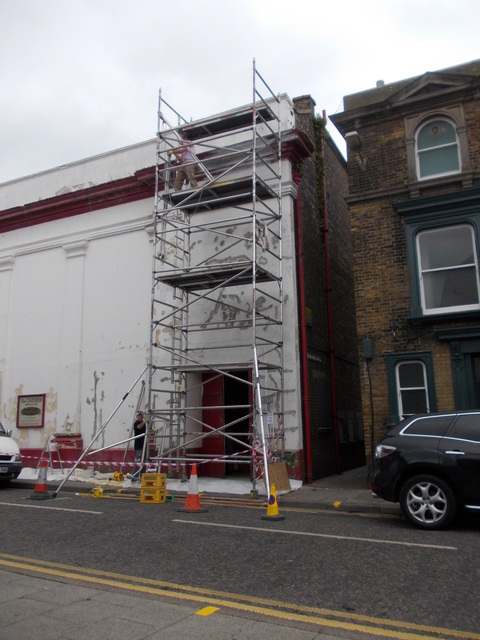 Opened on 9th October 1892 as the Oddfellows Hall for the Palmerston Lodge. It became the principle place in Deal to see concerts, plays and pantomimes. Films were screened from 5th March 1906 and cinema use came from 5th November 1910 and re-named Theatre Royal. It became a full-time cinema on 19th May, 1913.

Sound was installed in 1930, and between October 1933 and February 1934, the interior was re-modeled in an Art Deco style by architect Henry W. Coussens. The original wooden balcony was replaced by a steel and concrete structure, and the open truss roof was covered in fibrous plaster ceiling. It was re-named Royal Cinema.

Closed in October 1961, it became a bingo club until July 1963, when the Bloom Circuit transfered the bingo operation to their larger Regent Cinema. The Royal Cinema was then re-opened as a cinema, finally closing on 4th April 1981 with Elizabeth Taylor in "The Mirror Cracked".

I dated a girl whose Mom was from Kent.Wonder if Mrs.O. ever caught a movie there? Bet she did.It is a Small world.

Plans announced in August 2018 to demolish the building and replace it with 25 flats and retail. The amusement arcade has closed and the snooker upstairs would be lost. Owner Mark Woolls said the walls were too thick to convert the existing 1890 building. A time capsule photo of staircase added.

Further research has revealed the foundation stone was laid on the 9th October, 1890 by the mayor of Deal, so the hall opened in 1892. The first film shown was the famous Biograph animated pictures transferred from London, from 5th March, 1906. Mr Collins' 18 foot screen showed pictures from 5th Nov, 1910 but the Royal became a fulltime cinema from 19th May, 1913.