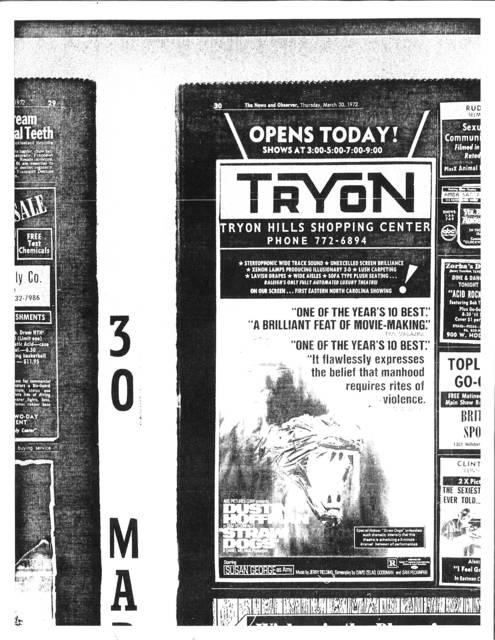 The Tryon Hills Theatre was also known as the Tryon Theatre. Located at 336 Tryon Road at the corner of South Wilmington Street and Tryon Road in the Tryon Hills Shopping Center where it links with U.S. Highways 70 and 401 and State Highway 50.

The theatre stood on the opposite end of the Tryon Hills Shopping Center where it opened in the mid-to-late-1960’s, that anchored a Winn-Dixie grocer, a Roses Discount Department Store, and several other businesses. The Tryon Hills Theatre or the Tryon Theatre was the last of the single screen moviehouses to be built on the Southeastern section of Raleigh and nearly Garner(not far from Downtown Raleigh).

The Tryon Hills Theatre officially opened on March 31, 1972. It was a 550 seat movie theatre that had a lot of great features and it was also the first for Southeast Raleigh that included unexcelled screen brilliance that offered widescreen projection for films that were shown in either 70mm or 35mm formats. Xenon lamps producing an illusionary 3-D imagery;stereophonic widetrack sound system in the auditorium;wide-aisles with sofa type plush seating with lush carpeting and lavish drapes;wide concession stand and it offered a full-automated luxury throughout the cinema.

At the time of its 1972 opening, the Tryon Hills Theatre was also the first fully automated theatre that was operational in Eastern North Carolina and a first in the greater Triangle area. It was the last single screen cinema to be built in Raleigh. The opening attraction for the Tryon Hills Theatre was the Sam Peckinpah feature "Straw Dogs" starring Dustin Hoffman and Susan George.

The Tryon Hills Theatre was basically a showplace for a variety of films ranging from adult cinema, blaxploitation, first-run features and family films and others of interest. Basically known as a "grindhouse" theatre it remained that way as a single screen theatre until November 8, 1991, when the theatre was split in two and remained in business as a discount theatre until its closing in early-1992. It was demolished in 1994.

Nowadays a storage facility center was built in 1996 in its place where the Tryon Hills Theatre once stood. The shopping center where the cinema was located now houses a Salvation Army Thrift Store and a beauty supply center store.

About the Tryon Hills Theatre,aka The Tryon Theatre:

I remember seeing a lot of good movies there in the mid-1980’s and early 1990’s when it was a single screen theatre. I remember seeing
“Out for Justice” with Steven Seagal in 1991. Also played here were a underrated flick title “Tuff Stuff” starring former Disney child actress Kim Richards where she played a tough biker chick with ESP.
Also played here were a lot of blaxploitation films,adult films,and other films of interest. I came back to this theatre six months later and this once great theatre was twinned where they split this once 550-seat theatre down the middle….which made it terrible. It became a discount movie house. After that it sucked,since the projected was always braking down and the picture was never focused. When it was twinned,it became the worst movie house in Raleigh. It closed shortly there after.

I too remember seeing NEW JACK CITY here when it was re-released as a discount movie house. All seats were just a buck and the projection was horrible.

One thing about alot of dollar houses they could streach out a zenox Bulb.

There were seven dollar houses in the Triangle during the 1990’s and 2000’s. Today,the ONLY dollar theatre left is the Blue Ridge 14.
The last twin dollar house closed in 2001.

Interesting comment about the TRYON HILLS THEATRE: It was one of several theatres in the South(when it was a single screen cinema)that had the longest-running movie to ever played here “WALKING TALL” that played to capacity crowds for a record of 36 weeks before it ended in December of 1973.

The TRYON HILLS,brought it back as a re-release too where it played for over 18 weeks in mid-1974. Reason,they could not keep up with the capacity crowds that came back to see it again and again.

“STAR WARS” played here on July 21,1978 as a re-release issue that also brought in the crowds.

This webpage has such a fond review of a theatre that was just pure CRAP!!! Every movie I saw there ALWAYS had the projector malfunction and the service was pitiful-GOOD RIDDANCE!!!

Owned and Operated under Premiere Theatres.