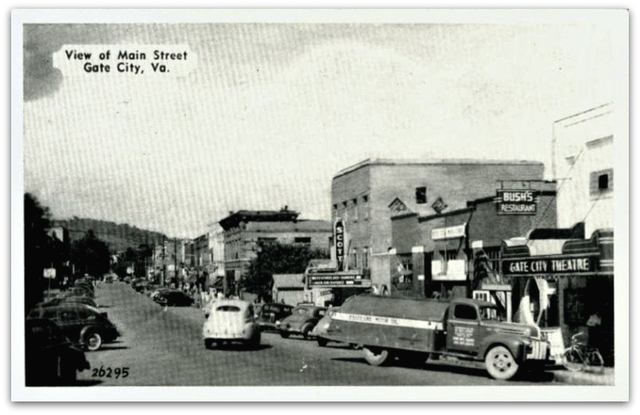 The old Gate City Theatre was opened in 1947, and was the ‘in’ place during the 1950’s and into the 1960’s with a large selection of westerns, family pictures and always those adventure film for children on Saturdays.

hopefully,someone can help on the seats.a friend said it held about 600 people or 631,some odd number.

PLEASE REMOVE FROM THE ADDRESS AND USE THE CORRECT ZIP CODE:

No MAIN STREET is in GATE CITY so Google Maps is going to WEBER CITY instead of GATE CITY and you need the corect ZIP CODE for GATE CITY.

Could use an address, more info and photos!

If it’s in Gate City, then the likely place is on W. Jackson St. I found a coupe of places that looked they could have been theaters.

There were 3 theaters in Gate City, all 3 were on the lower side of the street on Jackson Street. One was near the Virginia National Bank it was in the old Western Auto Store building. Anyone that remembers the Old Western Auto building should remember the floor was still sloped. One of the theaters was beside of Quillens Hardware, it burned down in the early 60’s. Between where DR. Griggs office was and where the old power company office was is the location of another theatre, you can’t really tell it was a theater from the outside but the inside was still intact and filled with antiques.

From the 1940s a photo postcard view of Main Street along with the Gate City Theatre.

Gate City did something with its numbering system, and the old Gate City Theatre building now has a different address. As near as I can tell, it is 271 W. Jackson Street. Google Maps misplaces all the addresses on Jackson Street, so here is a link to the correct location at Bing Maps.

The three story building which fronted the Scott Theatre, seen down the block in Don’s photo, is still standing, too. Its location can be fetched at Bing Maps using the address 245 W. Jackson Street. I don’t think the Scott’s auditorium is still intact, though. In Google’s satellite view, it looks like the roof of most of the auditorium section has been removed, though the walls are still there.