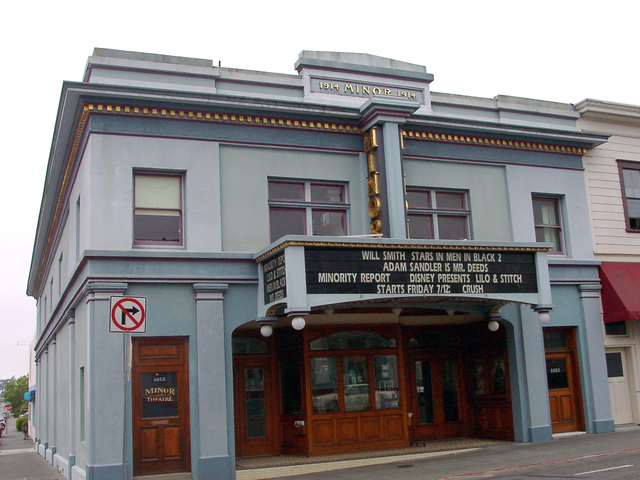 This is supposedly one of the oldest theaters in the United States that was built for the sole purpose of viewing movies. It was opened on December 3, 1914.

Just for argument’s sake, if the 1914 date on the building is correct, I would think there were quite a few nickelodeons built before that date that were solely for showing films.

No, not the oldest if it was built in 1912. The theater I help run, The Historic Park Theatre in Estes Park was built in 1913 for the sole purpose of showing films. Also, we are still a single screen. I also got a print from this Minor Theatre at one of my other theaters that was filthy and almost completly distroyed at the ripe old age of less than a year (sprockets on the sound track side completely chewed uo). I’m not saying it was them but…..

***Sorry, I meant 1914 in my first sentence of the above comment

I really appreciate these informations and I belive taht the historic Cinema LumiÃ¨re in Pisa (Italy) is the oldest purpose-built, continually operating cinema in the world.
The LumiÃ¨re opened in December 16th, 1905.
View link

In Italy the first commercial screening of movies with fully synchronized sound took place in the Cinema LumiÃ¨re (Pisa – Italy) in October 19th, 1906 by the Fabbrica Pisana di Pellicole Parlate, patented by Pietro Pierini with the name of “Isosincronizzatore”.

Until march 2009, KorsÃ¸r Biograf Teater (opened January 30th, 1907) in the danish city KorsÃ¸r was listed the oldest cinema in the Guinness Book of World Records. Before a cinema in Szczecin, Poland, was listed as the oldest.

The seating layout was changed in the renovations. The main auditorium now seats 295 people (including balcony), and the smaller theatres seat 86 and 80 people respectively. A total of 461 seats.

Interestingly enough, at the time the theatre was built (with the main auditorium seating over 500 people), the population in Arcata was roughly 1,000 people, making it nigh impossible to sell out the theatre.

The old operator, Coming Attractions, a very corporate operator, abruptly closed down the Minor and removed equipment and seats. The landlord brought in a partner and the Minor will reopen on Sept 16, 2016 with art house and retro movies, adding food and beer. Many seats have been removed to allow for tables and easy in and out. They set up a black tie opening night event, which was sold out as of yesterday. Sounds really good! I can hardly wait to go up to Arcata and experience this for myself. I’ve always loved the Minor.

The Minor theatre should be heritage listed!

Added 3 photos, all taken about a week ago, one of which is the plaque displayed in front of the theatre regarding it’s status as the nation’s oldest theatre built for feature films.