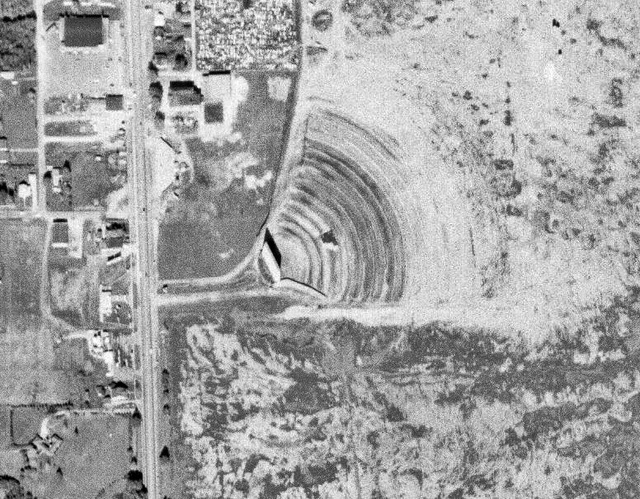 Single screen theater which was part of Butler Enterprises was opened in 1951.

NOt listed in my 1956 motion picture Almanac,either had closed or was not built yet.

Sometimes listed as being in Danville which is just to the north.

On the Google Map Satellite Photo is northeast of the red dot and south of East 14th Street. You can still sorta see the outline of some of the rows.

I purchased a drive in speaker off of eBay a few years back from the Skyway Drive in Theater. Super nice unique style. On the back of the speaker is cast “manufactured in Danville, IL.”…here’s a link to photo… http://www.flickr.com/photos/driveinspeakers/2970032077/in/photostream

I cannot provide the dates of startup and shutdown of the Skyway Drive-in, but as originally built it was designed to accommodate up to approx 1700 cars. I worked there as part time (weekend) projectionist off and on from 1965 to approx. 1972, then moved up to the Dixie D/I North of town until 1977. The Skyway got new “Pots” air-driven platters somewhere around 1970~71 time frame but after successfully testing them, never deployed them as they still had the old Carbon Arc lamps. Jack Butler (theater owner) bought modern, state-of-the-art POTS Air-driven platter film handling systems for all three of his Danville drive-ins (Skyway, Dixie & Illiana) but the Dixie was the only one that ever got new 6KW Optical Radiation Corp (ORC) Xenon lamphouses and went to full automation with homebrew, relay-logic controllers. Like all of Mr. Butler’s Drive-Ins, the Skyway ran IPC Super Simplex heads retrofitted with fast intermittent sprockets & RCA sound heads. The Skyway also used Super Panatar anamorphic adapters for Cinemascope/Panavision presentations along with a ¼ KW Altec amplifier pumping sound to the ramps. For several years in the late ‘60s and early '70s Mr.Butler resided in a small home at the Northeast rear corner of the Skyway property. He later purchased a more luxurious home in the 1700 block of N. Logan Ave. on Danville’s more affluent “north end”.

It must have opened by 1951. April 26, 1952 Boxoffice: “GEORGETOWN, ILL. – The Skyway Drive-in on the Georgetown road, opened its 1952 season April 6 with a new screen replacing the one blown down in the heavy windstorm of February 7.”