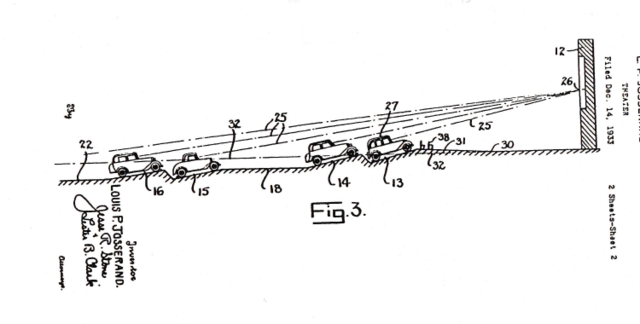 As the name says it was short reels shown, not features. Cartoons, one reelers, news and short subjects were all that was shown. It was built right on the beach with the cars facing out to sea over the Gulf of Mexico. Bad thing was it was put right in Hurricane Alley it was opened only twenty days, before a huge hurricane blew it away. It was never rebuilt!

This was the third drive-in theatre to be built in the United States. It opened on July 5, 1934, and was owned by Louis P. Josserand, an architect from Houston, Texas, who also designed it.

Louis Josserand was the proprietor.

Man that was a short life theatre.

I got it out of a book of History of Drive-ins.Amazing what you can in the discount bin at Borders.

Bob, get the book “THE AMERICAN DRIVE-IN MOVIE THEATRE” by Don and Susan Sanders,It has pictures of this rather strange drive-in.Motorbooks International Publishers and Wholesalers. 729 Prospect Ave,PO BOX 1,Osceola,WI.54020-0001. It is a great book.167 pages color and black and white photos.

Kerry Segrave’s 1992 book “Drive-In Theaters” (very dry but recommended for drive-in historians) spent most of two pages on Galveston’s drive-in. Louis P. Josserand was also the architect and inventor of this slightly different version. “The main difference between his plan and Hollingshead’s was that the former allowed for two sets of parking ramps between each aisle. Automobiles could enter or exit a parking space either forward or backward, as the incline was rounded, lacking any rails.”

The Galveston drive-in was graded on sand, which required almost daily efforts to restore after each performance. The whole thing cost only $1,500 to build, and was regarded as an experiment to test whether a more permanent version would become profitable.

First drive-in i have heard of, that didn’t screen features(unique?)!! Worlds shortest lived drive-in theatre? Is there anything on that site now?

I Tried Looking For Some Rare Attractions On The Galveston Daily News, And It Seems Its Difficult To Find.