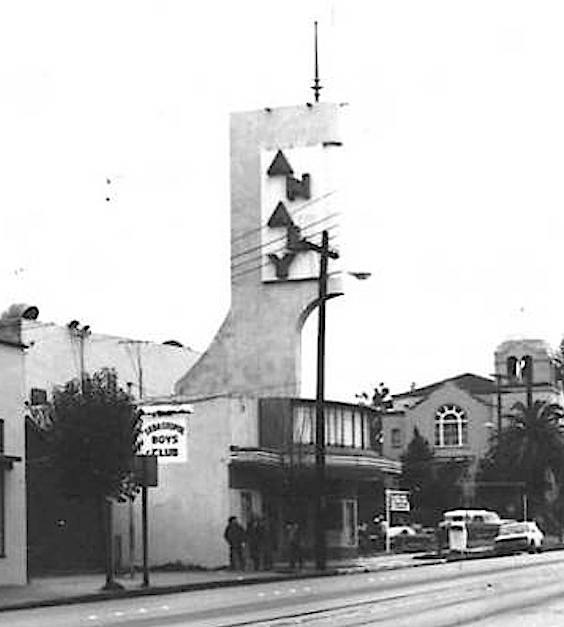 The Analay Theatre was opened June 23, 1949 with Loretta Young in “Mother is a Freshman”. Seating was provided on a stadium plan, with no overhanging balcony. It was designed by San Francisco based architect William W. Wolf. It was demolished in 1972.

William Wolf was one of the architects who sometimes signed off on theater plans actually done by William B. David, who was not a licensed architect. The Analy might be one of those theaters (the Altos Theatre in Los Altos, opened the same year as the Analy, was definitely a David design with Wolf as architect of record.) I recall seeing the Analy mentioned in Boxoffice several times, but I don’t recall any details about it and can’t check them now as I no longer have access to the magazine’s archives.

The Analy was built for Dan Tocchini Sr., who was the operator of several Nothern California theaters, including Sebastopol’s El Rey. Tocchini’s theater circuit is still in operation as SR Entertainment, headquartered in the Northern California town of Santa Rosa, and headed by Daniel F. Tocchini. There is a brief history of the company on their web site.

Sure could use an address, more info, and photos.

Richard Hardina’s intro to the El Rey Theatre says that the Analy Theatre was located on North Main Street.

Hi- My great grandfather was Dan Tocchini and my grandfather is Tony Gambogi who owned and operated the both the Ananly and El Rey Theaters. Luckily, the building where the El Rey theater was is still owned by father and uncle Bob and Dick Gambogi. If you have any further questions please feel free to contact me at .

Grand opening ad for the Analy Theatre on June 23, 1949 with “Mother is a Freshman" in photos.

I see that one of the congratulatory notices in the grand opening ad dallasmovietheaters just uploaded is from William B. David. That strongly suggests that he was indeed the actual (but unlicensed) architect of the house, with William W. Wolf signing the plans. Another of the notices is from Gus (Gale) Santocono, who was probably responsible for the decoration of the theater.