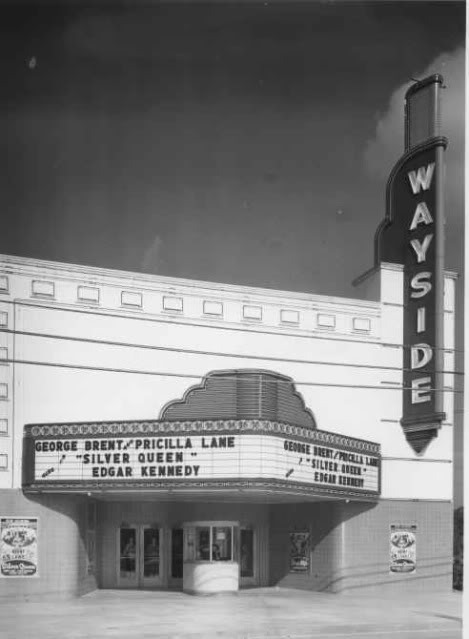 This Houston, TX. theatre was built in 1942 by Interstate Circuit Inc. of Dallas, TX. It was part of Houston’s sub-run theatres.

The Wayside Theatre was closed and demolished in 1957.

Here is one from probably late 1942 or early 1943, given the release date of the film on the marquee: View link

The information under the photo of the Wayside says" “The Wayside Theatre was closed and demolished in 1957”. I think that is an error, because I saw The Ten Commandments there in 1956. That film was such a huge blockbuster that the audience was packed and I even saw Catholic nuns in the audience wearing full habits. Also, it was presented as an exclusive vistaVision roadshow. They installed a special enlarged screen and stereophonic sound system for this special attraction and I think the seats were reserved, because I remember that they added tags to the seat arms with the row and seat number of each seat. For these reasons, The Ten Commandments was probably at the Wayside for months if not a full year. When they finally did stop showing movies at the Wayside, it became a dance hall or a supper club, or something like that. So, I don’t see how it could possibly have been closed and demolished in 1956.

Oops, my last sentence above contained a typo, I meant to say I don’t see how The Wayside Theater could have been demolished in 1957 when it was still going strong with a roadshow engagement of The Ten Commandments playing to packed audiences in 1956.

THE THING AT THE WAYSIDE In nineteen fifty one I was either nine or ten years old (depending on the month) and the Wayside Theater was in walking distance of my house.   It was a long walk, but that was not a problem at that age.   The price of admission for kids under twelve was nine cents and I could get a dime by turning in an empty milk bottle.  In 1951 a movie opened at the Wayside Theater called The Thing, the full title was “The Thing from another World”.  This is not to be confused with John Carpenter’s excellent 1982 remake with the same name.  In 1951 flying saucers were a hot topic and many adults believed flying saucers came from Mars.  It was a time of paranoia due to the cold war and many people were sure that either the Russians or men from Mars would soon attack the United States.  That’s what the world was like on a Saturday afternoon in 1951 when I walked down to the Wayside Theater anxious to see the new movie about flying saucers.  The “Thing” in the title of the film was the frozen pilot of a flying saucer that crashed in the arctic and was thawed out by a bunch of scientist working in an isolated arctic weather station.  The saucer pilot was an alien monster who was determined to kill the scientists before they could warn other humans. There is a big scene at the end of the movie when the “Thing” is killed by the scientists.  The scientists set up a trap so the monster had to walk down an isle which had been rigged up with high voltage cables.  They believed the monster was made of vegetable material and they theorized that high voltage electricity would fry him.  The monster had a halting way of walking down the isle; he took two or three steps, then paused.  Then, he took two or three more steps, then paused again and kept up this irregular pace until he reached the high voltage cables where they zapped him.  The sound of the monster’s steps  were emphasized on the film’s soundtrack to build up suspense.  When the monster was finally in position a scientist flipped a switch and lightening bolts shot out of the monster until it withered away and was burned to a crisp. It was a pretty scary scene for a nine year old kid.  When the film was over I came out of the theater and discovered that the sun had set and I realized that I’d have to walk home alone in the dark.  The last scene of The Thing was playing tricks on my nine year old mind as I walked home in the dark.  Moonlight flickering through the trees seemed to cast ominous shadows all around me. We lived in a big two story duplex and one half of the house was vacant, so the house always felt spooky when I was home alone, especially at night.  On this particular Saturday night, my parents were not home when I arrived and the house was completely dark.  I always entered by the back door that opened into the kitchen.  The kitchen door was wide open and I wondered if I forgot to close it when I went to the movie, or did someone else open it?  As I entered the dark kitchen, I heard a sound coming from the upstairs bedroom.  It sounded like someone was walking around upstairs and the walk had the same halting clump-clump-pause sound The Thing made as it walked down the isle in the movie just before it got electrocuted. I called out my parents names and nobody answered, but I continued to hear someone walking around upstairs. Who or WHAT was upstairs! Finally, I ran to the nearest house and told the man my parents were not home and I thought a prowler was walking around upstairs in my house.  I said I wanted to stay in his house until my parents got home, because I was afraid to go back to my house. I didn’t mention that I just saw a scary movie at the Wayside Theater.  The neighbor got a flashlight and a baseball bat and went over to my back door with his two teenage sons following behind him.  When we got to my backdoor we all heard the footsteps upstairs.  My neighbor called out like I did earlier and there was no reply.  Finally, my neighbor decided to go into the house to investigate.  After a few tense minutes, he came back with a grim look on his face, and then he broke into laughter.  He turned on the lights and invited us to come upstairs and see who was walking around.  My parents bedroom had Venetian blinds and a gentle breeze at the upstairs windows was causing the blinds to swing inward and when they fell back against the wooden window frame they bounced and made the clunk-clunk sound that sounded like footsteps.  We were all having a good laugh when my parents came home wondering what the heck was going on.  My parents felt guilty for getting home late, so I didn’t get in trouble for overreacting.  After all, that sound also fooled the neighbor who was an adult.  I didn’t want to push my luck and get in trouble for going to see a scary movie and walking home alone in the dark, so I never told anyone I went to see The Thing at the Wayside Theater.