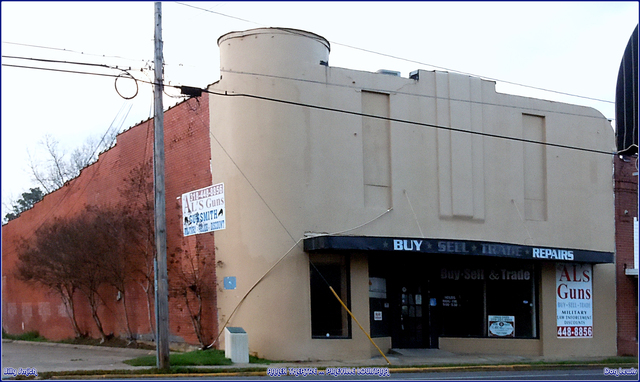 Located in the Pineville suburb of Alexandria. The Hauber Annex Theatre was built right next to the already operating Hauber Theatre. It had seating provided for 440 in the orchestra level and 120 seats in the balcony.

Construction began in April 1941, and from June 20, 1941 the theatre opened, operating in the evenings only as an outdoor theatre. It was eventually roofed over and was fully completed to open on December 5, 1941. It was designed by and operated by O.C. Hauber. The Hauber Theatre was closed in 1946 and the Hauber Annex Theatre was renamed Hauber Theatre. On July 20, 1950 the former Hauber Annex Theatre was renamed Star Theatre.

After being known as the Hauber Annex Theatre from 1941 to late 1946, Otto C. Hauber sold of the original Hauber Theatre closing November 17, 1946 after a ten-year run at 635 Main Street. This theatre listed at 621 Main Street changed its name to the Hauber Theatre which was its name from November 17, 1946 to its quick sale on May 30, 1950. Upon closing for a remodel, it reopened.

Within two months, Charles P. Morel – who had operated theMoon Theatre in Alexandria from 1937-9) opened the venue in July of 1950. A refurbishing of the projection booth didn’t pay out in February of 1956 as a fire gutting the interior ended the location’s run as a movie theatre on February 8, 1956. It was retrofitted as a retail operation.

(Minutiae: Though the correct address of this theatre in Alexandria is, indeed, 637 Main Street, it does so despite the fact that the neighboring building going uptown carries the lower 635 Main Street. The original Hauber building next door technically was 635-637 Main with 621 Main being this entry, the Hauber Annex. When the Hauber Annex turned Hauber, the address appears to have gotten fouled up.)