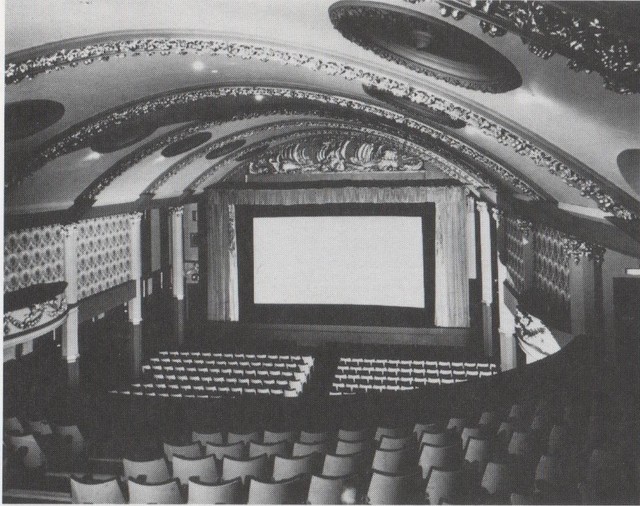 This Manchester city centre cinema opened as the Picture House on 15th December 1911 with film of “Pictures of Captain Scott’s Antarctic Expedition”. It was built for and operated by the Provincial Cinematograph Theatres(PCT) chain and designed by architectural firm Naylor & Sale of Derby.

The building is located on the corner of Oxford Road and Chepstow Street, and was located next to the (now demolished Hippodrome/Gaumont) and across the road from the (now demolished Paramount/Odeon). It has an attractive red brick and red terra cotta façade, with the name ‘The Picture House’ located in the stonework above the entrance. Inside the auditorium, the lower parts of the side walls were wood panelled, with the upper parts covered with tapestries.

Taken over by the J.F. Emery Circuit in August 1931, they operated the New Oxford Cinema until 1946. It was equipped to screen CinemaScope films in 1953, and became (together with the Deansgate Cinema) the home of 20th Century Fox films in central Manchester.

The New Oxford Theatre was taken over by the Rank Organisation on 12th June 1960, and was their roadshow house, playing long runs of “Ben Hur” and other blockbusters. In later years after this type of film dried up, and the Odeon over the road had been twinned and the Gaumont next door converted into a nightclub, the New Oxford Theatre played less popular films. It was closed on 25th October 1980 with David Carradine in "The Long Riders".

apparently the barrel vaulted ceiling with its decorative plasterwork remains and is a training centre for McDonalds staff, the separate entry is at the rear of the building

Again, Ken, you are missing a trick. Prior to its becoming a MacDonalds restaurant, a substantial part of the building spent several years as a casino. Run as a Ladbroke’s Sporting Club, the entrance was from the old Lyon’s Corner House, on the corner, from where a staircase led up to a large gaming room, which ran across the full front of the building, above the cinema foyer.