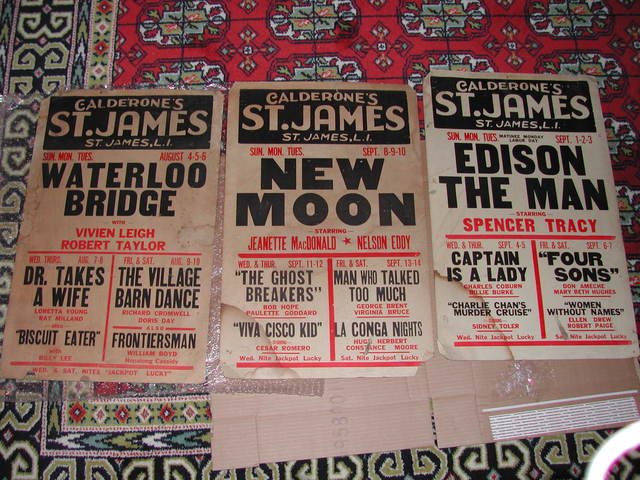 Ground was broken for this, the third venue in town to bear the St. James name, on April 2, 1929. The 35 x 90 stucco, fireproof structure was built at a cost of $25,000 for John Brennan by Westerbeke Builders of West Sayville. Henry Kost, operator of the Sayville Theatre, leased the property for five years to expand his theatrical interests. The St. James Theatre is located one block east of the main north-south artery, Lake Avenue, around the corner from the first original St. James Theatre, which still stands, and which dates back to the first decade of the 20th century.

I got some information on the St. James from Geoffrey K. Fleming and found the image of the original (see the other CT listing) in his book. This theatre building also appears in his book as a 1927 aerial view. I have not been able to determine when it was built or obtain an exterior photo of the facade in it’s day. Tried with the Buildings and Tax Department but their records only go back to the 1940s. When I visited this theatre a couple of years ago Ruth let me go upstairs where I photoed the restored ceiling decoration. One of these days I’ll upload them.

I only got wind of the St. James when I was looking for something else in an old Newsday Movie Time Table.

Since this was a Calderone Theatre acquired by the son of Salvatore, who was the theatre magnet, and died in 1929, there would be nothing in the Calderone collection at Hofstra.

I’ve tried looking at the newspaper records which are available on line but found no activity. I did find, however, references to other theatrical activity in the town (but didn’t record that).

Amending an earlier comment. In light of later information indicating ground was broken for the theater in April 1929, it is apparent that the aerial photograph labelled 1927 was taken at a later date. The when may be tough to establish.

According to the Smithtown Messenger “Johnnie Brennan’s” theatre opened October 1, 1929. At a reported cost of $ 25,000 the 30 x 90 stucco building was intended as a venue for vaudeville and films. At opening it was called The Little Playhouse at St. James and under a five year lease to Henry Kost who operated theatres in Sayville and Patchogue.

Added current photos of the exterior and interior. A second floor office space was created and the original ceiling supports boxed in. I don’t know what they looked like originally. The detail of the ceiling has been carefully recreated.

Early aerial photo shows the theater in the upper left. The original St. James, still standing is on the left side of the main road, Lake Avenue at about 2 o'clock.

Try as I might I can’t locate a picture from the day. But, as I’ve tried to enlarge the aerial photo it appears as though there was some sort of marquee.

jackader I currently work in the building and would like to clarify. The owner since 1985 is Natalie Weinstein a noted Long Island interior designer. It is currently the home of Uniquely Natalie a quaility furniture consignment store. Secondly Natalie is the founder of Celebrate St.James – Past – Present – Future. A not for profit whose mission is to preserve and celebrate St. James history and inspire an appreciation and knowledge of the arts of our great town We would be very greatful to anyone who can provide us with pictures and information about the History of this theater. Especially regarding live vaudeville performaces. We are already in possession of playbill from the early 1940’s when it was the calderone movie theater. Thank you

It is my understanding that before Natalie purchased the property it had been used as a garage. I remember reading that when she was doing renovations she came upon the old bathrooms. It took major digging to get the minimal information which appears on this site even going through the historical society. The second floor of Natalie’s property on Lake was the site of the original St. James Theater.

Newsday Classic Edition for January 23, 1951 arrived today. According to the Movie Timetable the St. James was still open then. The movie, The West Point Story with two evening performances.

Uploaded a recent photo of the facade.