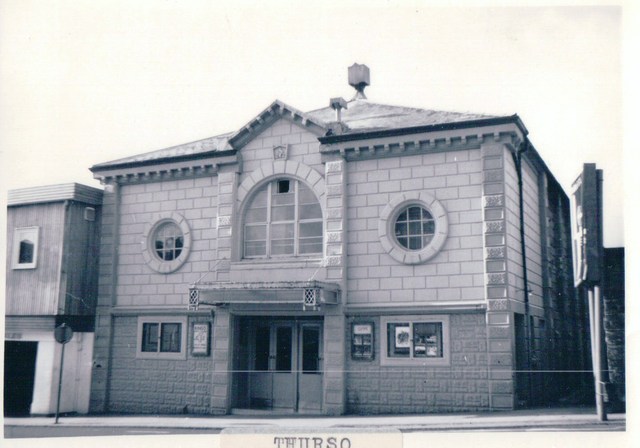 The Picture House was built in 1921/22 and opened on Monday 1st November 1922 with 484 seats. It was a purpose built cinema/theatre replacing it’s other location at Grove Lane which opened in 1912.

The Picture House was built in an early Art Deco style, but the interior may have been more towards Art Nouveau until 1935 when fire gutted the balcony. After renovations it was completely Art Deco style inside, with the ceiling and other elements including areas of paint still surviving to this day. A photo of the 1936 interior exists in the Johnston Collection, Wick.

The cinema stayed independant until 1947 when Caledonian Associated Cinemas took over. In 1955/56 it was extended due to a massive increase in the towns' population and was extended to provide a capacity of 670 seats with Cinemascope and Stereo sound. Previously the screen had been 13ft x 10ft but was increased to 35ft x 15ft. With the decline of cinema audiences through the 1950’s and 1960’s, bingo was introduced, and in the early-1970s bingo stalls were put in front of the stage reducing seating to 484. The screen was remasked down to 30ft x 10ft at this time.

It closed on Saturday 24th September 1983 and became a nightclub in 1985 (in 2010 named Skinandis). CAC also admitted they had been mistaken in closing the Picture House.

Externally the building looks much the same with only a change of paint, a modern canopy and the roof has just had it first new slate since it was built. Items of projection equipment, seats, screen curtains and curtain motor have all been preserved by Cinema For Thurso Group in their archive.