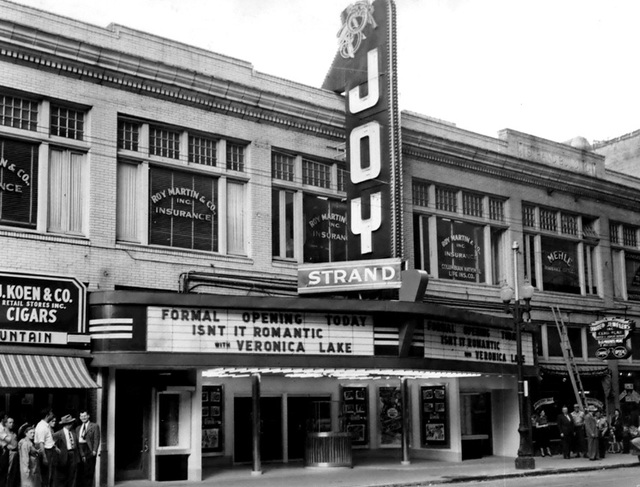 Opened in 1917, the Strand Theatre was the Saenger Amusement Company’s star New Orleans house until the opening of the Saenger Theatre years later.

Originally, the Strand Theatre hosted vaudeville and stage acts as well as screening movies, had its own "concert orchestra" and housed a Wurlitzer Style 4 organ, which was later replaced with a 3 manual, 8 rank Robert Morton organ. In 1937 it was taken over by the Joy Theatres chain.

Decades later, in an attempt to lure away audiences from television, a vast curved screen was installed, and the Strand Theatre became New Orleans' first movie house to screen films in the "Todd A-O" process for several years and was renamed Panorama Theatre.

Unfortunately, the theatre later fell into decline, was closed and later razed.

In 1937, Joy Houck leased the Strand Theatre and operated it until it closed in 1958. At this time, he re-named the theatre Joy Strand. I remember my father telling me that this was a popular spot for kids to go while playing hookie from school. Here’s a photo of the Joy Strand:
View link

<<< Decades later, in an attempt to lure away audiences from television, a vast curved screen was installed, and the Strand Theatre became New Orleans' first movie house to screen films in the “Todd A-O” process for several years. >>>

This is correct except that at that time the theater was called the Panorama.

I have a vivid recollection of seeing RAINTREE COUNTY here in its “roadshow” engagement in 1957 while I was a student at Tulane University. I loved it. My only negative was the fact that the “waterfall” screen curtain was lowered too soon right at the end of the film destroying a moment 3 hours in the making! As with the legend, pleasures/experiences along the journey are more important than whatever you find or don’t find at the journey’s end.

In my previous comment, my better guess is that I saw RAINTREE COUNTY at the Panaroma in New Orleans in 1958 rather than 1957.

Per a check of the Times-Picayune back issues, the general release (not roadshow) first run of “Raintree County” at the Panorama was held December 25th, 1957 through March 4th, 1958.

Sorry folks, this theater was open till at least 1959 when I saw the original screening of Walt Disney’s Sleeping Beauty with my mom. I remember well that the theater was quite old, but what I remember best is that my mom bought me a Sleeping Beauty souvenir from a table of merchandise outside the entry doors in the arcade. It would be nice if someone would post interior photos of this theater.