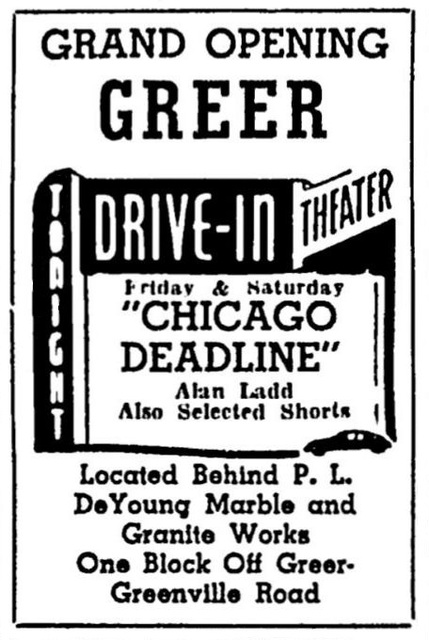 The Greer Drive-In opened on May 18, 1950, featuring the 1949 movie “Chicago Deadline” with Alan Ladd, Donna Reed and June Havoc. It was owned by H.B. McManus, B.C. Wilson and Patricia Burns. The theatre featured a parking ramp that could hold 320 cars. In July of 1959, McManus and Stanton Belmont, who owned the Pine Street Ext Drive-In, King Cotton Drive-In and Belmont Drive-In, stood trial for exhibition of motion pictures on a Sunday, violating the Sunday blue law. It ended up with a mis-trial. The Sunday blue laws were a problem for all theatre operators during this time in the Spartanburg, SC area.

Don Wilson, who worked for Consolidated Theatres, opened the Pinewood Indoor Theatre for Consolidated in 1965. In May of 1974, Watson formed a partnership with Furman Babb and started Scott Theatres (named after his son). They opened the Royal Twin Theatre on May 2, 1975, and purchased the Fox(aka Camalot) Drive-In the same month. In March 1979, they would buy the Greer Drive-In. Scott Theatres had plans to twin the Greer Drive-In, but it never happened. The Greer Drive-In was closed in 1986 and was demolished. The property was sold to Ryan’s Steakhouse for their Corporate Headquarters.