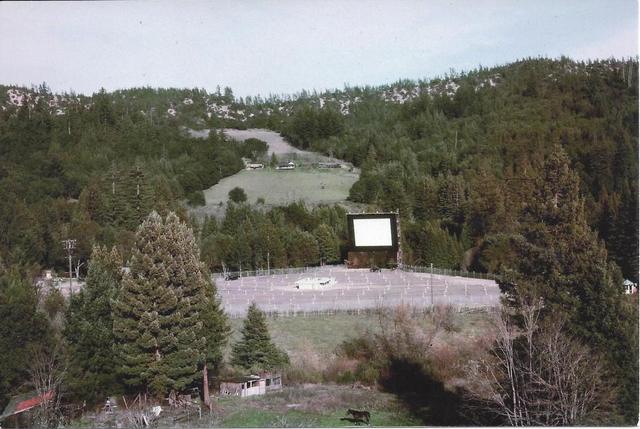 Starview Drive-In was located on Big Basin Highway midway between Big Basin State Park and Boulder Creek, CA. Opened in 1947, it was a single standard screen theatre with space for 375 cars.

In 1954, my parents managed the theatre and I was the projectionist. I was 14 years old at the time. The theatre was open during the summer tourist season as it relied upon the visitors to the State Park for customers. I believe the theatre closed in 1955 and was shortly thereafter demolished.

Thanks for the photos Chuck.

This was such a nice to visit when I was a kid. They closed in the mid 50’s and never put in a wide CinemaScope® screen. Same owners I think as the old Burl Theatre in Boulder Creek, that building is still around but no longer a movie theatre.

The Starview Drive-In was opened in 1947, and was the first drive-in theater in Santa Cruz County. The owners were Frank Paone and John Forde who, in 1949, would open the much larger Encina Drive-In in Santa Cruz. They operated the Encina in partnership with a regional chain called Trans-California Theaters, but I’ve been unable to discover if the same arrangement was in effect at the Starview.