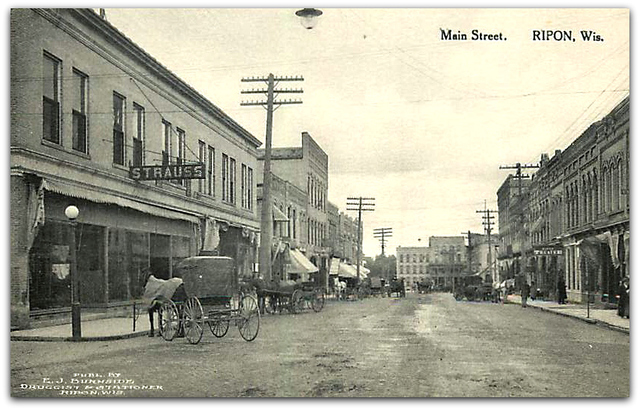 From the early 1900s a photo postcard view of Main Street along with the Ripon Theatre in Ripon.

An item in the January 13, 1912 issue of The Moving Picture World said that the operators of theaters at Waupun had leased the Ripon Theatre in Ripon and would convert it to a motion picture house. It gave the location of the theater as the “…west side of the public square….”

“Public square” refers to the extra wide block of Watson Street with the parkway down the center. The Campus Theatre is on the east side of that block, and has an odd number, so the Ripon Theatre of 1912 would have been on the even-numbered side of the 100 block.

The Ripon Theatre was probably the former Grand Opera House, seen in this early photo and in this later one which shows the whole west side of the square. I’ve been unable to discover when the Opera House was built, but it is mentioned as early as 1888. In the 1897 and 1900 Cahn guides it is listed as Stone’s Opera House. I don’t know what became of the Opera House, but there are no three storey buildings on that block today.

The postcard Don Lewis linked to shows the 200 block of Watson Street in the foreground, looking north toward the square.

Ben Marcus bought this building by January 1937. It was initially called the Auditorium. Sometime in the 1940s it started to be called Ripon Theatre.

In the book “Ripon” By Amanda Gesiorski, Naomi Jahn, Christian Krueger; Edited by Andrew Prellwitz and David Sakrison, on page 87 it says the Grand Opera House burned down in 1906.

The building was also used by the National Guard when Ben Marcus bought it.