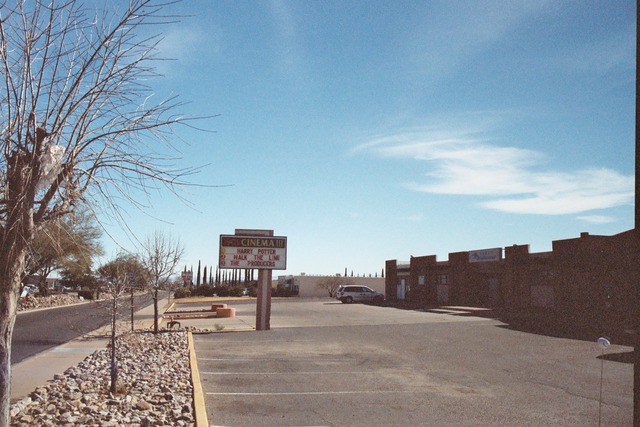 The R & M Theatre opened in January 1977 by brothers Ralph & Mickey Kroft (hence the name R & M). When it opened, the only other theatre in town was the Geronimo Drive-In, which closed in 1984. The first movies screened at the R & M Theatre were a double bill program of “Midway” & “The Hindenberg”. Initially opened as a single screen theatre, two more smaller screens were added in the late-1980’s, when the seating capacity was given as 586. Cinemark took over this theatre.

The R & M became a discount house when Cinemark opened the Sierra Vista 10 in the fall of 1999. It was independently operated as a discount cinema when it closed in February 2006 with Peter Jackson’s “King Kong”. It has been converted into office space.

I visited this cinema only once when I was assigned to Fort Huachuca. My wife and I went to see Sean Connery in NEVER SAY NEVER AGAIN (in 1983, the year two James Bond films were released). I was not overly impressed by the theater. I would not even say that the cinema had seen better days because I do not think there were any better days.

We went to see NEVER SAY NEVER AGAIN in Sierra Vista the first weekend of its release. As the AAFES theater on the military post normally screened movies months after their release date it was a treat to see a first run movie without having to drive 70 miles to Tucson. Unfortunately the film was spliced together poorly. The film soundtrack sounded “tinny,” and the air conditioning did nothing to circulate the thick humid air out of the auditorium. Most of the seats were dirty or stained and floor had the stickiness of masking tape.

Years later we returned to Fort Huachuca for a brief assignment and found ourselves living in Sierra Vista only a few blocks away from the cinema. STAR TREK V was showing at the theater and I would have gone to see the film except that I clearely recalled the circumstances of my visit six years earlier.

I was there opening weekend. It was a double-feature of MIDWAY and THE HINDENBURG. Saw many, many movies here growing in SV. Fun times!!!