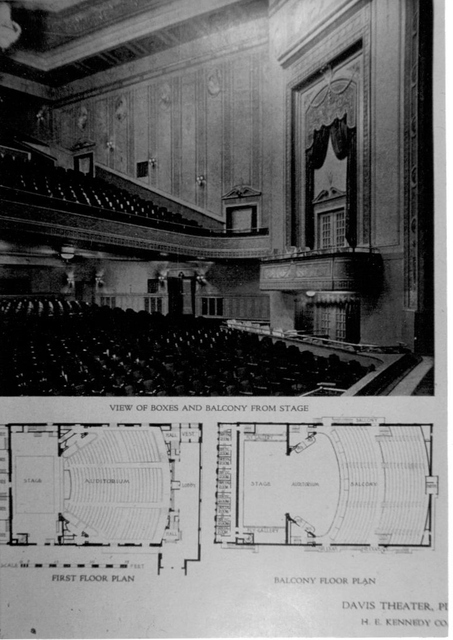 Not much known about this theatre other than it was opened February 15, 1915 as a live theatre. It had a narrow Neo-Classical style facade extending back to a large auditorium in back. The area has been replaced by modern construction now.

The Davis Theatre was built by, and named for, Charles Lindley Davis, an actor, playwright, and impresario who also built and operated the Alvin Theatre in Pittsburgh.

A 1922 book, History of Pittsburgh and environs, has this to say about Davis’s theater operations:

“The Harry Davis Stock Company, another Pittsburgh enterprise, controls the Alvin Theatre, presenting first class road companies, and under this management is also the Davis Theatre, built and opened in 1915, a member of the Keith’s circuit, where the highest class refined vaudeville entertainments are given. Under this management are also the Grand Opera House and the Lyric Theatre.”

I have to correct my previous comment. The Davis Theatre was built in 1915, six years after Charles Davis died. I’ve been unable to determine the exact relationship between Charles Davis and Harry Davis, but I know that after C.L. Davis' death, Harry Davis took control of his theatrical enterprises.

The obituary of C. L. Davis (Charles Lindley; born Alvin Joslin, which where the Alvin name comes from) is available online at the New York times, and according to that he had no living relatives.

It is known Harry Davis was the brother-in-law of John P. Harris; those two co-founded either the first Nickelodeon or certainly one of the first in Pittsburgh in 1905.

That’s what happens when I read a source too quickly and I’m not fully awake yet. I forgot that I’d already noted on the Alvin (Gateway) Theatre page that Charles Davis had sold that house to B.F. Keith’s circuit in 1900 (I’ve been unable to discover what became of his Alvin in New York.)

The Davis Theatre obviously must have been named for Harry Davis. Over the years a number of his theaters, including the Davis, were operated in a pooling deal with the Kieth circuit. It was apparently through the deal with Keith that the Pittsburgh Alvin came under the Harry Davis company’s management.

The current Neil Simon Theatre in New York was known as the Alvin from its opening in 1927 until it was renamed for the playwright in 1983. However, according to the theater’s information at the IBDB, this Alvin was named for Alex A. Aarons and Vinton Freedley. I am wondering if thee was an earlier Alvin in New York.

At Google Books a few days ago I came across a reference to Davis having an Alvin Theatre in New York in the late 19th century, but now I can’t find it. I’m wondering if it was another of those things I read too quickly and misunderstood. The earlier Alvin in New York might be a figment.

I’ve come across another interesting book, published in 1909, which has a few brief paragraphs about both Davises and B.F. Keith. The passage about Charles Davis is quite derogatory about his play, calling it “…perhaps the poorest vehicle in the way of a play that was ever inflicted on an audience.” A later paragraph makes reference to a conflict between Harry Davis and Keith in which Keith apparently attempted to take over Davis’s operations, but no details are given. It sounds like an interesting story, but I’ve been unable to find any source that tells it all.

The Davis Theatre opened February 15, 1915 with the Famous Davis Players in “Baby Mine”