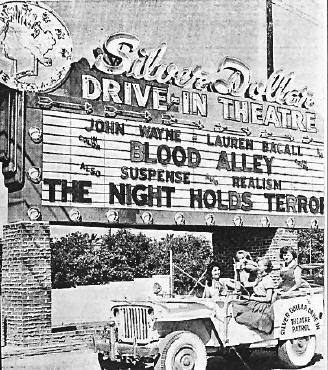 The drive-in closed in the mid-1980’s and has since been leveled.

Any further information on this drive-in would be appreciated.

You link does not work Mike R.

This was a family favorite drive-in. Lots of fond memories…

I, John Moore lived one block from here, my friends and i
use to sneek in via the fence or the trunks of cars. Had the most memorable moments of my life around here.
Thanks to all. Very sad to see it gone.

The Silver Dollar was built in 1950 by my father, Woodrow Wickersham. I was only ten at the time but I helped a little. My older sister and I would work in the snack bar on weekends. The admission price was one dollar per car. The movie on opening day was Red River staring John Wayne. The theatre was sold in 1956.

The price of admission was one dollar per car. My folks did not expect to make money on the admissions but on all the stuff that we sold in the snack bar. Cold drinks were 10 cents, hot dogs a quarter, candy was 5 cents except for Mars Bars which were 10 cents. We even made our own ice cream. The snack bar had silver dollars inbedded in the floor. While my folks owned it, the theatre was a great success. Chris Wickersham

Hi Chris. I live in the Phoenix Area and also a native of Arizona. I would be interested in hearing more about your father and the building of the Silver Dollar Drive In. Did your father Woodrow help construct the site and parking area as well? Thanks for your time. William Horner

Our family loved going to the Silver Dollar for the double features. Some of my best childhood memories are of this theater.