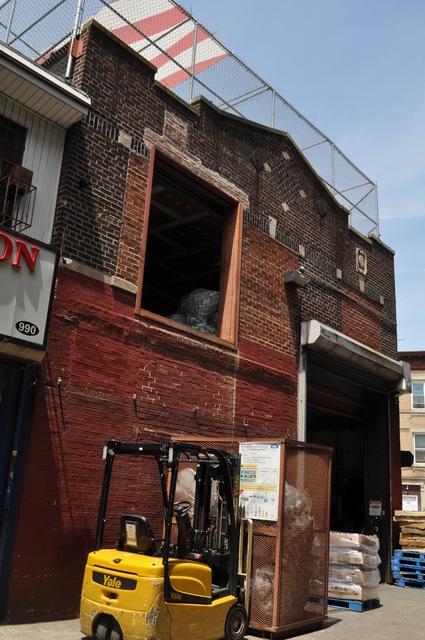 The Ditmas Theatre was a short lived venture, operating from 1918 to 1920. In recent years it has been in use by a soda distributor.

Ken, thanks for finding the “mystery theater” of 990 McDonald Avenue. That’s my old neighborhood and I remember back in the 1980s the owner of the soda place telling me that it was a theater. But 1920, how did you research this?

The BMT Culver El on McDonald Avenue was opened in 1919. Prior to that the BRT railroad ran at ground level with a stations at 18th Avenue, and near Elmwood Avenue, which may explain why two (and later three with the Culver Theater) were located on this small stretch of McDonald Avenue in the days before the automobile was common.

Info and photos are always welcome.

Information was gleaned from the excellent book(s) The Brooklyn Theatre Index Volume’s I & II by Cezar Del Valle. Published by Theatre Talks LLC in 2010, and available from Amazon. A ‘must buy’ for theatre enthusiasts, especially those in New York and surrounding area.

The ceiling is very high and IIRC you could see evidence of where the projectionist’s booth was. Maybe one of the Brooklynites on the board can pay a visit to 990 McDonald Avenue and tell us if any evidence of it’s 80 years ago movie theater days is still visible.

Looks like there was another “Ditmas Theater” a few blocks away at 115 Ditmas Avenue, with overlapping operating dates, each closing in 1920:

Hmm. So there were two Ditmas movie houses – one a theater and the other a theatre – that were situated, either right on or just off McDonald Ave., only a few blocks apart – and both closed on the very same year! This sounds almost too coincidental and at least suggests that only one of these theaters actually existed. Ken, does the book that you referenced shed any light on this? Specifically, does it say anything about the “other” Ditmas? Also, can anyone else cite a situation where two theaters with the very same names were situated in such close proximity? I certainly cannot think of any.

Thanks Ken for the very quick response. So, this very coincidental situation did, in fact, occur.

I initially found the 1920 closing of both theaters odd, since the opening of the Culver El would seem to have made McDonald Ave. a more attractive place to run a theater. (Just think of all the movie houses that thrived, under the El, on Broadway and Fulton St. in Brooklyn.) I then remembered that the opening of the Culver El did not mark the end of street level railroad service and that a freight line continued to run on McDonald Ave. for many decades thereafter. This two level of train service probably undermined the commercial attractiveness for running movie houses here, especially when other less impacted commercial strips were situated in close proximity. In any event, that is my very speculative theory. Any other ideas?

This 990 McDonald theatre was directly under the el so the noise problem may have been a factor in it’s closing. The other Ditmas theater appears in the photograph to be closer to East 2 Street where the elevated train noise wouldn’t be a big problem.

After the El opened in 1920 trolley cars used the street trackage until 1956. And also the occasional freight train until 1978 when the tracks were permanently removed in places during the repaving of McDonald Avenue.

McDonald Avenue was never a desirable business location because of the El. A lot of stores would come and go, along with chronic vacancies.