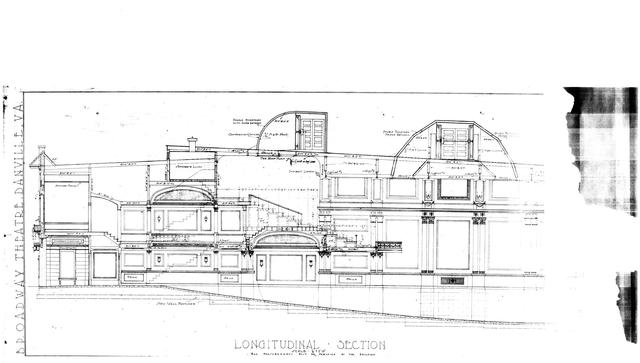 Hailed as the east coast’s premiere vaudeville home, it was rivaled by none in luxury and comfort. The theater was constructed in 1907.

The theater facade resembled that of a French Palace with a touch of Egyptian flavor. The theater was 27 ½ ft wide and 200 ft deep. The theater was the first in America to offer a lounge and outside balcony. The theater included a balcony, mezzanine level, and main floor.

The floors were made from black marble and also decorated with colored tile. The murals depicted historical events in Greek history and plaster moldings depicted gargoyles. The stage was 20 ft. wide and 15 ft. deep with a orchestra pit to hold 10 members. The theater also contained 4 opera boxes.

The bathrooms were very ornate. Black and gold tiled flooring and marble sinks with gold faucets. The walls were made with mahogony wood, stained to a deep red.

The theater burned in 1920 and was restored fully, reopening November 15, 1920. The theater was operated by Southern Amusement Company until 1940 when it was bought by R. Lea and became the Lea Theater.

It operated until 1965. The building was then converted to retail space and became Elenores which closed shortly after. Today the property is owned by Edward Heard of Chapel Hill,NC. The state of the interior is not known.

Hackworth writes, “I do not know for sure if the property is for sale, but they always say everything has its price. The original blueprints exist with building instructions and pictures.

The Broadway Theatre was located at 409 Main Street.

The Broadway theatre was reopened at the usual hour today after damages, caused by a fire yesterday afternoon in the projection room had forced the movie house to close its doors the remainder of the day. The damage, including the loss of two reels, approximately four thousand feet of film, was estimated at between $200 and $300.

There was no excitement on the part of the audience when it learned that there was a blaze, according to Mr. J.C. Hester, general manager of the Southern Amusement Company. He said that people left the building orderly, some of them stopping just before reaching the outside to watch efforts to extinguish the blaze. Even some of the patrons in the balcony remained there until Mr. Hester announced to them that there had been a blaze, destroying the films, and that there would be no further performances for the day.

There was an account of another fire on May 18, 1964 in the Danville Bee. This was a rather significant blaze. It appears from the introduction that the second fire was the end of movies being shown and after renovation the building re-opened for retail.

Here is my picture from December 2010. The exterior looks very nice!

This is most likely the theater mentioned in the April 23, 1907, issue of the journal Daily Bulletin of the Manufacturers Record: “Danville, Va. â€"Theater. â€"Contract for theater to be erected for S. A. Schloss, recently reported, has been awarded to D. Hanna; work to begin at once. Plans were prepared by Hook & Rogers, Charlotte, N. C.” Charles C. Hook was one of the leading architects in Charlotte, North Carolina, during the first third of the 20th century, and was one of the architects of the Carolina Theatre in Charlotte. His partnership with Willard G. Rogers lasted from 1905 to 1916.

What a difference there is between the December, 2010, photo Andy linked to and the way the building looked when the Google Street View camera truck passed by sometime before the restoration took place! In the current Street View, the ground floor was all glass shop windows of the sort built in the 1950s and 1960s, and the upper floors were concealed behind a false front.

The new ground floor, at least, has to be a reconstruction rather than a restoration, as there was nothing there to restore. I don’t know how much remained of the original facade on the upper floors behind that false front, but as the center section was recessed a bit, and might have been merely concealed rather than removed, perhaps that part of the current facade is at least partly a restoration of the original. The cornice and marquee are certainly reconstructions, though.

When the theater operated as the Lea Theater there was a massive fire just after midnight on May 18, 1964, causing an estimated $150,000 in damages. It was determined that the fire started around the stage/screen area and spread throughout the auditorium and into other parts of the theater causing damage in the business office and projector room. The roof collapsed just in front of the stage and partially in the balcony area.

Can someone please find the exact opening date for the Broadway in 1920 after it was rebuilt. We’ve looked in our public library at the newspaper archives, but some years are missing and 1920 was one of those years.