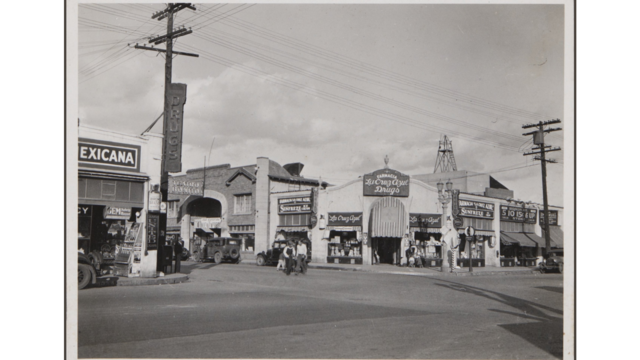 Joe; The Garden Theatre was located at 4511 Anaheim Road, Belvedere Gardens. Other theatres listed in this district in 1950 were….Golden Gate, New Boulevard, Royale, Strand and United Artists all of which were on Whittier Boulevard.

The theatre that Cinema Treasures has listed at 1520 E. First St. is called the Aliso Theatre. It probably got renamed when the Aliso Village housing project was built across the street.

KenRoe: Anaheim Road must refer to the street now called Telegraph Road, which shows up on old maps as Anaheim-Telegraph Road. Interestingly, the 4500 E. block was probably right at the southern end of Ford Boulevard, so the Garden was probably about a mile and a half south of the Bonito. The Garden would most likely be gone now, as the intersection of Anaheim-Telegraph Road and Ford Boulevard was pretty much obliterated by the construction of the Long Beach Freeway-Santa Ana Freeway interchange.

I don’t think the Garden Theatre is listed at Cinema Treasures.

There is a print shop on the first floor. I took a couple of photos. Status should be changed to retail.

The L.A. County Assessor’s office gives the date of construction for the 7403 sq.ft. building at this address as 1925.

A 1946 opening under the name Bonito Theatre indicates that there is probably a missing aka, as the building (which in the vintage photo looks like it has a stage house) dates from 1925. The reliable Bill Counter says the remodeled building is currently in use as a print shop.